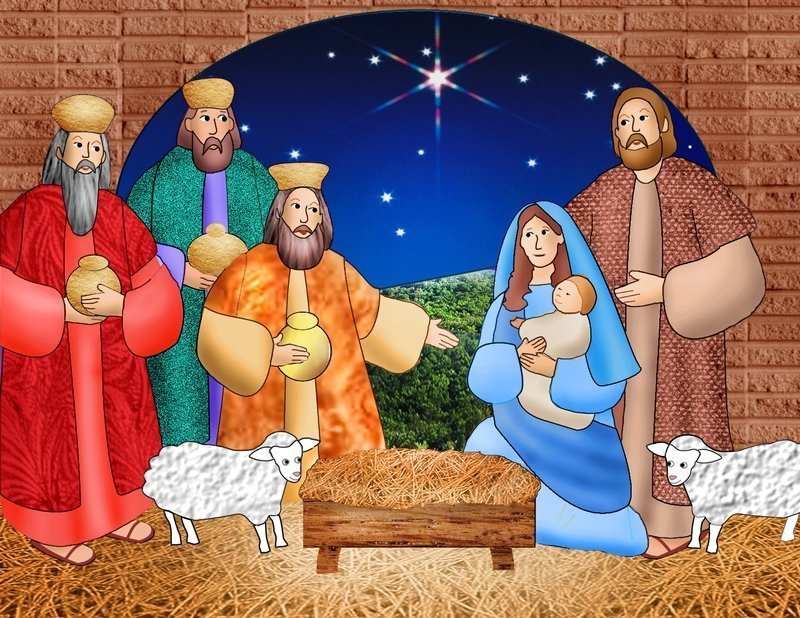 The Magi bring gifts to Jesus

The Magi bring gifts to Jesus

At the time of Jesus’ birth in Bethlehem, there were Magi from the East who arrived in Jerusalem.

“Where is the newborn king of the Jews?” they asked. “We saw his star at its rising and have come to do him homage.”

When King Herod heard this, he was deeply concerned.

So he gathered the chief priests and the scribes and asked them what the Scriptures said about the place where the Messiah was to be born.

“In Bethlehem of Judea,” they replied, “for thus it has been written through the prophet: And you, Bethlehem, land of Judah, are by no means least among the rulers of Judah; since from you shall come a ruler, who is to shepherd my people Israel.“

Upon hearing this, King Herod secretly called the Magi to see him. He asked them when the star first appeared so he could figure out exactly when the Messiah had been born.

Then he told the Magi that Bethlehem was the city in which the Messiah was to be born and told them to go there.

“Go and search diligently for the child. When you have found him, bring me word, that I too may go and do him homage,” King Herod told them.

The Magi didn’t know it, but King Herod was lying to them. He actually wanted to harm the Messiah, because he feared the Messiah would take away his kingly power.

After their meeting with King Herod, the Magi continued on their journey. As they headed toward Bethlehem, they once again saw the star and followed it.

As they came into Bethlehem, the star stopped over the place where Jesus was.

The Magi were overjoyed because they knew they had finally found the Messiah. They entered the house and saw Jesus with Mary, his mother.

The Magi prostrated themselves — which means to lay facedown on the ground — and paid homage to Jesus.

Then they gave Jesus very expensive gifts of gold, frankincense and myrrh.

And before the Magi left Bethlehem, they were warned in a dream not to return to King Herod. So they left for their home country by a different route.

1. Who was the person the Magi were looking for?

2. What did King Herod want to do to the Messiah?

Matthew 2 is the only Gospel that describes “Magi from the East” — also known as the Wise Men or the Three Kings — who visited Jesus after his birth and gave him gifts of gold, frankincense and myrrh.

Matthew 2 is short on details about the Magi. For example, the Gospel does not say how many there were. Since the Magi gave Jesus three gifts, it is tradition to say that there were three.

It also is tradition to say that the men were kings, although a note in the New American Bible says the word “Magi” refers to the priestly caste of ancient Persia (modern-day Iran, which is to the east of Bethlehem).

The same note in the New American Bible calls the Magi “astrologers,” which means they studied the stars because they thought those heavenly bodies played a role in earthly events.

Although the Bible does not refer to the Magi by name, traditionally they are called Caspar (or Gaspar), Melchior and Balthazar.

St. Ita was born near Waterford, Irelandyalty. She persuaded her father to allow her to remain unmarried so she , and was said to be descended from rocould concentrate on her faith life.

She eventually moved to County Limerick where she and some other young women served God. It is said she founded a school for young boys, and one of her students was the famous abbot and missionary St. Brendan.