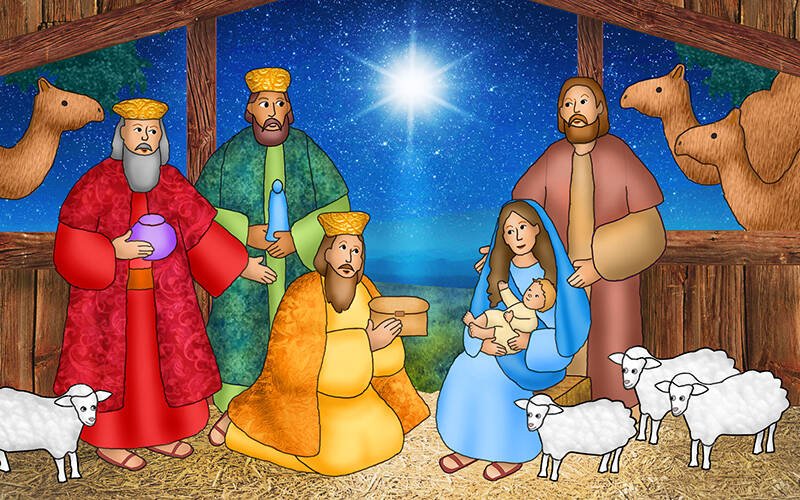 Children’s story: The visit of the Magi
Essay
Bible Accent: An angel warns Joseph in a dream
Saint for Today: St. Paula
Puzzle: Fill in the blanks

When Jesus was born, King Herod was ruler of the region of Judea, which included the cities of Jerusalem and Bethlehem.

One day, Magi from the East arrived in Jerusalem.

“Where is the newborn king of the Jews?” they asked. “We saw his star at its rising and have come to do him homage.”

When King Herod heard this, he and all of Jerusalem were very troubled.

The king gathered the chief priests and scribes to find out where the Christ was to be born.

“In Bethlehem of Judea,” they said, “for thus it has been written through the prophet: ‘And you, Bethlehem, land of Judah, are by no means least among the rulers of Judah; since from you shall come a ruler, who is to shepherd my people Israel.’”

After receiving this answer, King Herod secretly summoned the Magi and learned from them when the star they had been following had first appeared.

Then he told them the child could be found in Bethlehem.

“Go and search diligently for the child,” he told the Magi. “When you have found him, bring me word, that I too may go and do him homage.”

After their audience with King Herod, the Magi set out, and the star they had been following continued to lead them.

Finally, the star stopped over the place where the child was in Bethlehem.

The Magi were overjoyed and, on entering the house, they saw the child with his mother, Mary.

They prostrated themselves and did the child homage, then gave him gifts of gold, frankincense and myrrh.

Afterward, the Magi left for their country by another route, because they had been warned in a dream not to return to King Herod in Jerusalem.

When King Herod realized the Magi had deceived him and would not be returning, he was furious, because he actually wanted to destroy the child.

The king then implemented an evil plan based on what the Magi had told him about the star’s appearance. He ordered the deaths of all boys age 2 and under who lived in Bethlehem and its vicinity, thinking that the child would be among them.

1. Who was looking for the infant Jesus?

2. What gifts did Jesus receive?

When have you refused to do something you felt was wrong?

The Magi were not the only ones who received a warning in a dream.

In Matthew 2:13, we read that after the Magi departed, an angel of God appeared to Joseph in a dream.

“Rise, take the child and his mother, flee to Egypt, and stay there until I tell you. Herod is going to search for the child to destroy him,” the angel said.

When he woke up, Joseph took the child and his mother and fled to Egypt by night.

Joseph, Mary and Jesus stayed in Egypt until the death of King Herod. This fulfilled what the Lord had said through the prophet: “Out of Egypt I called my son.”

When Herod died, an angel again came to Joseph in a dream.

“Rise, take the child and his mother and go to the land of Israel, for those who sought the child’s life are dead,” the angel said.

But when Joseph heard that Archelaus was ruling over Judea in place of his father, he was afraid to go back there.

And because he had been warned in a dream, he instead departed for Galilee and dwelt in the town of Nazareth, so that what had been spoken through the prophets might be fulfilled: “He shall be called a Nazorean.”

St. Paula was born to a noble family in Rome in 347. She married and had five children, but was widowed at age 32.

Another widow introduced her to St. Jerome, a priest who was St. Damasus’ papal secretary. Jerome became her spiritual director, and she helped him translate Greek biblical texts for his new Latin version of the Bible.

When Jerome left Rome for the Holy Land, Paula followed. She taught herself Hebrew, and she spent all of her wealth building a monastery, three convents and a hospital in Bethlehem.

Using the hints provided, fill in the blanks in these sentences about Jesus’ birth: