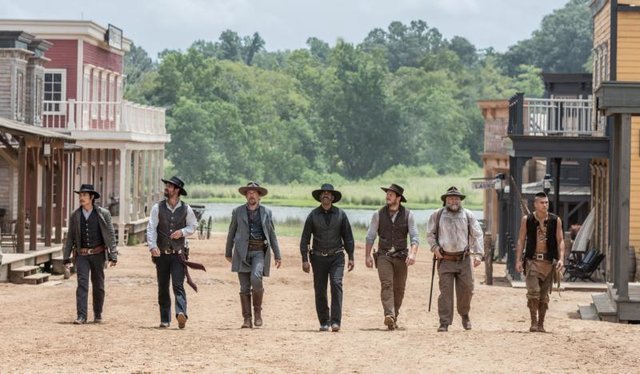 Byung-hun Lee, Manuel Garcia-Rulfo, Ethan Hawke, Denzel Washington, Chris Pratt, Vincent D'Onofrio and Martin Sensmeier star in a scene from the movie "The Magnificent Seven." The Catholic News Service classification is A-III -- adults. The Motion Picture Association of America rating is PG-13 -- parents strongly cautioned. Some material may be inappropriate for children under 13.
By John Mulderig
Catholic News Service
NEW YORK (CNS) — A chivalrous parable that showcases self-sacrificing heroism, "The Magnificent Seven" (Columbia) can be read as illustrating, in microcosm, Catholic theology’s theory of a just war.
Essentially, that teaching holds that, just as an individual has the right to self-defense, so too a community or a nation is justified in using the minimal amount of force necessary to repel unwarranted aggression.
Yet, if director Antoine Fuqua jaunty Western is a tale about righting an egregious wrong, it’s also an exercise in unrestrained and creative death-dealing. As such, its steady stream of mayhem will undercut its pretentions to morality in the eyes of at least some grown moviegoers.
Set in 1879, Nic Pizzolatto and Richard Wenk’s script loses little time in introducing us to a villain we can love to hate or in felling his first innocent victims.
Ruthless gold-mining mogul Bartholomew Bogue (Peter Sarsgaard) has decided he wants the land on which the frontier town of Rose Creek stands for his own. So, with his private army of thugs at his back, he breaks into the local church — where the citizenry busily debates what to do about him — and the killing in cold blood soon commences. Once it ends, he threatens the survivors with a similar fate unless they sell out to him for a pittance.
Though most of the burgh’s inhabitants see no choice but to buckle under, plucky Emma Cullen (Haley Bennett), the widow of one of Bogue’s victims, is having none of it. Instead, she hires roving lawman Sam Chisolm (Denzel Washington) to organize resistance. The result is a motley band of skilled gunmen — Chris Pratt and Ethan Hawke are its other most prominent figures — and an extended shoot-’em-up showdown.
The titular grouping is marked not only by the shared outsider status of its members but by their varied ethnicities and backgrounds, despite which, in the ideal American manner, they manage to bond through mutual admiration.
Thus, although he’s an ex-Confederate soldier famed for his exploits at Antietam, Hawke’s character, Goodnight Robicheaux, is also an old friend of Chisolm’s. And Robicheaux’s closest pal is Chinese immigrant Billy Rocks (Byung-hun Lee), whose skill with knives makes him a welcome addition to the pack.
In similar rise-above-it fashion, renowned Indian fighter Jack Horne (Vincent D’Onofrio) gets to like his newfound Comanche comrade, Red Harvest (Martin Sensmeier). As for Pratt’s persona, Josh Faraday, he likes to mock Mexican fugitive Vasquez (Manuel Garcia-Rulfo). But Vasquez gets the better of him with Spanish insults Faraday mistakes for compliments.
Amid the furious action, Fuqua’s remake of the 1960 film of the same title, which was itself, in turn, adapted from Akira Kurosawa’s 1954 classic "Seven Samurai," pauses occasionally to reflect on the dividing line between justice and vengeance. It also features Christian references and imagery — the burned-out church, for instance, becomes ground zero in the climactic struggle — as well as examples of devotion ranging from the sincere to the eccentric.
Though it’s appealing to find explicit, if nondenominational, Christian faith occupying such a prominent and positive place in a contemporary Hollywood film, at least some believers may view "The Magnificent Seven" as pitting good against evil simply in order to let the bullets fly.
The film contains constant stylized violence with gunplay and explosions but very little blood, several uses of profanity, a couple of mild oaths and numerous crude and crass expressions. The Catholic News Service classification is A-III — adults. The Motion Picture Association of America rating is PG-13 — parents strongly cautioned. Some material may be inappropriate for children under 13.
– – –
Mulderig is on the staff of Catholic News Service.
Copyright © 2022 Catholic News Service, Inc. All rights reserved. Linking is encouraged, but republishing or redistributing, including by framing or similar means, without the publisher's prior written permission is prohibited.