The Man With the Iron Fists - Catholic Courier 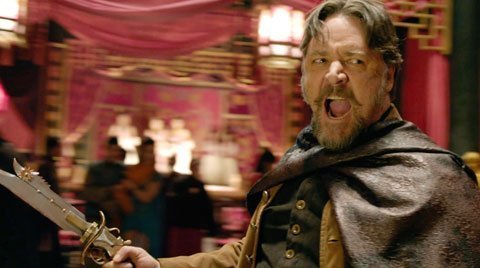 NEW YORK (CNS) — Viewers will need an ironclad stomach to sit through "The Man With the Iron Fists" (Universal). This repulsively violent martial-arts fantasy is like a visual encyclopedia of nasty killing methods — and that’s not to mention its glamorization of casual and even bizarre sexual encounters.

Rapper RZA directed, co-wrote (with Eli Roth) and stars in this atrocious flick, which is apparently intended as a homage to the so-called chopsocky cinema of the 1960s and ’70s. Far from administering stylized karate chops, however, the warriors who make up this melee dismember, disembowel and even liquefy their enemies to sickening effect.

RZA’s character, an unnamed blacksmith, narrates the proceedings — which find the smithy joining forces with Jack Knife (Russell Crowe), a British expatriate who serves as a secret agent for the emperor of China, and Zen Yi (Rick Yune), the heir of an assassinated warlord.

Together the trio is out to prevent a shipment of imperial gold from falling into the hands of a variety of villains. These include, but are not limited to, Silver Lion (Byron Mann), the culprit responsible for dispatching Zen Yi’s father, and Brass Body (David Bautista) whose eponymous attribute renders him seemingly invincible.

One principal locale for the gory action is a brothel run by Madam Blossom (Lucy Liu) where Lady Silk (Jamie Chung), the girl of the blacksmith’s dreams, resides. Jack Knife, who makes the cathouse his local HQ, follows up his spectacular evisceration of a rival customer by escorting no fewer three lovelies upstairs at once.

Showing them an instrument of torture, which he intends to use as a sex toy, he declares — apparently with reference to the Inquisition — "Let’s pretend we’re Catholic!"

Even the soundtrack contributes to the degraded atmosphere, featuring as it does more than one rap lyric in which the most frequent turns of phrase seem to involve the N-word followed by its F equivalent.