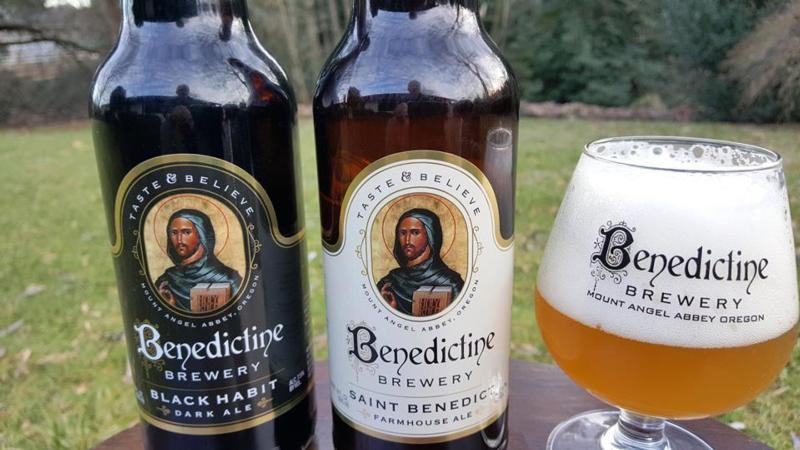 MOUNT ANGEL, Ore. (CNS) — It’s a brand-new brewery with a tradition reaching back 1,500 years, its charisms including welcoming visitors and giving the monks involved a way to earn a living for Mount Angel Abbey.

“It’s part of our tradition of hospitality,” said Benedictine Abbot Jeremy Driscoll, who greeted one friend after another — some for the first time — at the Benedictine Brewery’s grand opening.

He noted that while meeting a priest in a church might create an uncomfortable atmosphere for some visitors, the brewery offered a chance to relax and see the monks at work. “It’s like buckshot: It’s a chance to talk with people, not necessarily about God, but to share a good beer, and then who knows?”

Benedictine Father Martin Grassel is brewmaster, something he’d never planned for. He was already a priest when he began brewing beer, something that, as it turned out, he was good at.

Abbot Jeremy decided that a brewery had a place “on the hill,” or rather, at the foot of the hill just a couple hundred feet shy of Abbey Drive, which leads to Mount Angel Abbey.

A year ago there was an old-fashioned barn-raising style building party; the result, decorated with images from Mount Angel Abbey’s history, is a handsome, light-filled building with a friendly feel.

At 2 p.m. on opening day in late September, Father Martin was amazed to see a line all the way back to the door and out.

“People are interested in what we’re doing,” he told the Catholic Sentinel, newspaper of the Archdiocese of Portland.

Gerry Frazier, Joyce Brue and Dorothy Barich, all members of St. Patrick Parish in Canby, were pleased with the drive, the beer, the warm pretzels, cheese and sausage snacks, and the company.

When Benedictine Brother Cyril Drnjevic sat with them to talk, he said the brewery would help the monks, who are responsible for earning their living. “We’re trying to offer a really good product in a monastic way.”

The women all approved.

Abbot Jeremy said the monks involved with production would spend part of their work days here. As for the consuming side, he shared that irresponsible drinking is dangerous, and that the abbey would endeavor to serve and sell responsibly.

The brewery appropriately looks onto some of the abbey’s nearly 150-year-old hop fields, which produce the hops that give the Benedictine Brewery’s offerings their “Northwest Belgian style.”

For a man who didn’t care all that much about beer a decade ago, Father Martin now discusses it with the enthusiasm of a convert, with listeners scrambling to discern the difference between hoppy lagers, malt forward ales, porters, stouts, and Belgian dubbels and tripels.

For non-connoisseurs, the important bits are that the brewery makes Belgian style beers and that they’re good.

As for insider advice, visitors should wander up to the bookstore, the chapel and the library while they’re there — and also note what the monks themselves are drinking. For the most part it’s that Black Habit Ale, the brewery’s flagship ale, which has gotten top reviews.

“It’s not really that dark a beer,” said Father Martin, giving the go-ahead for those who usually choose a can of Corona or Bud Light.

Even so, on opening day the St. Michael’s Hellas, a traditional German pale lager beer, was the best-seller.

Editor’s Note: More information about the brewery can be found at Mountangelabbey.org/Benedictine-brewery.

Hannum is a staff writer at the Catholic Sentinel, newspaper of the Archdiocese of Portland.