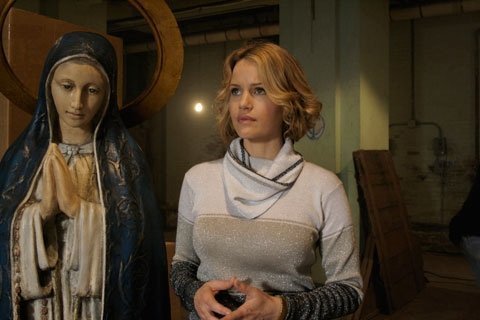 NEW YORK (CNS) — “The Mighty Macs” (Freestyle) is the fact-based story of a women’s basketball team from a Catholic college who, through the grit and determination of their rookie coach, got a shot at the national title.

This old-fashioned, family-friendly film is “Sister Act” without the singing, “Rocky” with basketballs, and “The Trouble with Angels” with Ellen Bursytn in the Rosalind Russell role of the mother superior.

The year is 1972, the feminist movement is picking up steam, and change is in the air. For Cathy Rush (Carla Gugino), 23 and recently married, this means searching for a role to play beyond that of dutiful housewife to her husband, Ed (David Boreanaz). A star basketball player herself, Cathy missed out on her own chance for glory, as her college eliminated the sport.

Against Ed’s wishes, Cathy takes a job at Pennsylvania’s Immaculata College (now University), run by the Congregation of the Sisters, Servants of the Immaculate Heart of Mary. The stern mother superior, Mother St. John (Bursytn), has no time for sports; she’s trying to keep the school afloat, fighting off appeals from the board and the church to close its doors. Impatient and irritable, she gives Cathy free rein to build a team from scratch.

This is Cathy’s big chance and, although not a Catholic, she is determined to fit in and succeed, inspiring a ragtag group of girls to become a fighting force by believing in themselves. They practice despite not having a court, with improvised uniforms fashioned from nuns’ smocks.

Cathy’s faith never wavers, as she hands out “We Will Be #1” buttons all over town. Help arrives in the form of the youngest nun, Sister Sunday (Marley Shelton). Like Cathy, she is struggling with her vocation, trying to find her place in a traditional world. She also shares an interest in basketball. The two bond, and Sister Sunday becomes the assistant coach, drawing out the older nuns to cheer the team on at games.

Against all odds, the “Macs” of Immaculata College make their way to their sport’s first-ever national championship game. Cathy not only saves herself and her marriage, but the fortunes of the college — melting the cold heart of Mother St. John in the process.

Directed by newcomer Tim Chambers, “The Mighty Macs” is a feel-good movie offering lessons in friendship, teamwork, trust and perseverance. For the most part, Catholicism is treated with respect, but it serves more as a colorful backdrop than a source for commentary.

Sister Sunday provides some harmless comic relief. She lends Cathy a habit so they can qualify for free tickets on United Airlines. (“Second nun flies for free.”)

Explaining her call to the religious life, Sister Sunday expresses her love for Jesus. “That whole Cana thing?” she observes, “Jesus just wanted everyone to have a good time.”

The entire family will have a good time at “The Mighty Macs.”