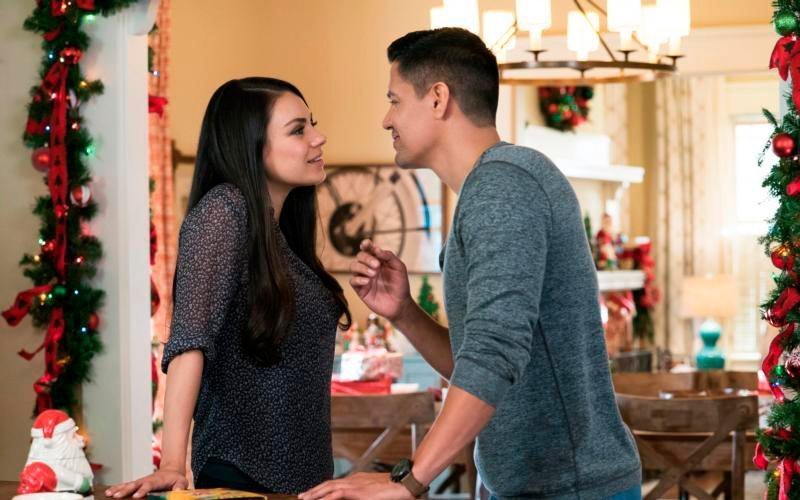 Mila Kunis and Jay Hernandez star in a scene from the movie "A Bad Moms Christmas." (CNS photo by STX Entertainment)

Like a stocking stuffed full of nasty surprises, the script, as penned by returning screenwriters and directors Jon Lucas and Scott Moore, is a grab-bag of low-minded jokes and sight gags.

The trio of mothers — Amy (Mila Kunis), Kiki (Kristen Bell) and Carla (Kathryn Hahn) -‚Äì who grappled with the demands of parenting in the 2016 original have a new set of problems to confront this time. Their fresh, wholly unrealistic, difficulties are caused not by their kids but by their own moms when they turn up, with or without an invitation, for Christmas.

Ruth (Christine Baranski), the stiff matriarch of Amy’s family, is an impossible-to-please perfectionist, Kiki’s ma, Sandy (Cheryl Hines), is clingy and intrusive, while Carla’s hippy progenitor, Isis (Susan Sarandon), breezes into and out of her daughter’s life on a whim. All of these characteristics are carried to ridiculous extremes, as when Hines’ character lurks in the dark watching Kiki and her hubby, Kent (Lyle Brocato), become intimate.

The only thing more tiresome than the three leads’ sex-obsessed wisecracking is their self-important resolve to take the feast back and celebrate it in their own fashion. Since that approach includes ogling male strippers dressed as “sexy Santas” — for one of whom, Ty (Justin Hartley), Carla falls — to say they’ve lost touch with the reason for the season is an understatement.

From having Ty and Carla meet cute when he turns up at the spa where she works before his performance to have his private parts shaved to the recurring use by a child actor of the jarringly sacrilegious phrase abbreviated as OMFG, Lucas and Moore scrape the sordid bottom of Hollywood’s long-emptied barrel of bad taste.

Yes, Virginia, you really can stay home instead.

Mulderig is on the staff of Catholic News Service.
– – –