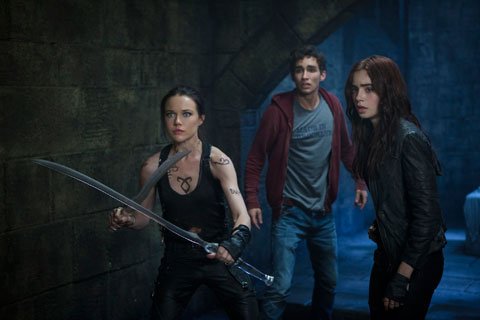 Given the inappropriate thematic territory into which this adaptation of the first in a series of bestsellers by Cassandra Clare strays, however — not to mention a higher volume of mayhem than is usual for the genre — many parents will find the film completely unsuitable for youngsters.

That’s not because the mythos behind the picture places its heroine — Brooklyn-reared teen Clarissa "Clary" Fray (Lily Collins) — anywhere other than on the side of goodness. Indeed, in the wake of her mother Jocelyn’s (Lena Headey) mysterious disappearance amid violent circumstances, Clary discovers that she is part of a race of half-human, half-angel warriors called Shadowhunters whose primary aim in life is to defeat demons.

So far so good, though the fact that this revelation comes about partly via a reading of tarot cards by Clary’s spooky downstairs neighbor Madame Dorothea (CCH Pounder) may not sit well with some. Nor is there much to object to in the overall trajectory of the quest that the confused but valiant Clary subsequently undertakes.

Aided by her strictly human best friend, Simon (Robert Sheehan), and by three newfound allies of her own kind — Jace (Jamie Campbell Bower), Isabelle (Jemima West) and Isabelle’s brother Alec (Kevin Zegers) — Clary sets off in pursuit of the Mortal Cup, a powerful Grail-like vessel that Jocelyn had been secretly guarding for years. For reasons too elaborate (or tenuous) to be detailed here, Clary hopes recovery of the Mortal Cup will lead to a reunion with Mom.

The search that ensues joins a Dan Brown-style hidden history premise to sets out of Harry Potter and a "Twilight"-like, eenie-meenie love dilemma pitting reliable but dull Simon against glamorous but touchy Jace in a struggle for Clary’s heart. All of which could easily be overlooked were it not for some of the milestones along the way.

Stopping in a church to pick up weapons for an incidental rumble against a pack of vampires, Jace informs Clary that all denominations, in fact all religions, are "sisters" in the Shadowhunters’ fight against darkness. So they could as easily have retrieved the necessary arms from a synagogue or a Buddhist temple.

But which of these creeds does Jace put faith in, Clary understandably wonders. His basic response: none.

Adult viewers could probably interpret the first part of that exchange as an acceptable recognition of the respect due to believers of every stripe. And sophisticated moviegoers realize that an individual character’s stance on matters of faith does not necessarily correspond to the message the narrative as a whole is intended to convey.

But the immature or poorly catechized could easily take far more damaging signals from the scene.

Also of concern are two plot developments that complicate Clary’s relationship with Jace. The first involves a male character whose disapproval of the pair’s strengthening ties turns out to be driven by his own romantic interest in Jace.

Earlier, the same character is shown to have won the admiring attention of New York’s most powerful warlock, Magnus Bane (Godfrey Gao). This doesn’t come as a complete shock, though, since Bane’s idea of a good time involves hosting decadent parties while sporting pantyhose.

A rather more serious stumbling block is placed in Jace and Clary’s path to bliss by the intimation that they may, in fact, be siblings. While the weight of the evidence seems to be against this queasy contention, the inclusion of such a possibility in a movie for young people seems startlingly ill-advised.

The film contains constant intense but mostly bloodless violence, a potentially confusing treatment of religion, occult and other mature themes, including homosexuality and incest, a transvestite character and at least one use of profanity. The Catholic News Service classification is A-III — adults. The Motion Picture Association of America rating is PG-13 — parents strongly cautioned. Some material may be inappropriate for children under 13.