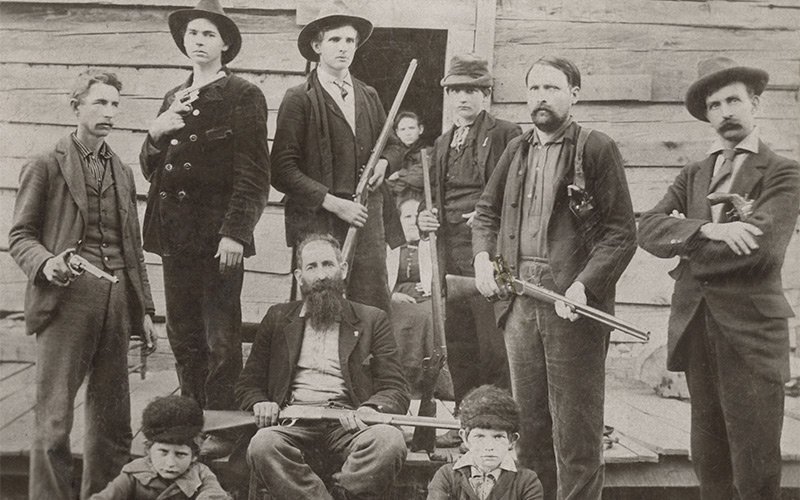 William Anderson Hatfield, known as Devil Anse, sits cross-legged with his rifle across his lap. He poses for a traveling photographer alongside members of his family and local workers. Circa 1880-1890s. (Photo courtesy West Virginia and Regional History Center, WVU Libraries)

Randall MacLowry wrote, produced and directed the film, which examines what is arguably the most iconic feud in American history — that, of course, between the Hatfields and the McCoys.

MacLowry has made numerous films for the series and network, including most notably 2016’s “The Mine Wars.” Also set in Southwestern West Virginia, the locale of “The Feud,” and recalling the violent skirmishes between striking coal miners and corporate security forces at the beginning of the 20th century, “The Mine Wars” is, in a sense, a sequel to the newer film.

The documentary opens with West Virginian historian Chuck Keeney commenting on, of all things, a Bugs Bunny cartoon: “Hillbilly Hare.” He’s a descendant of Frank Keeney, a notable West Virginian union organizer who played a crucial role in “The Mine Wars.”

Saying he first learned of the conflict between the families through this cartoon, Keeney adds that it perpetuated “the stereotype of the hillbilly in popular consciousness as … simpleminded, violent, and backward people.”

But, as the documentarians persuasively argue, the storied inter-familial dispute was a “much richer and more complex story,” one that represented “a people’s way of life slipping away and their struggle to adapt to forces far beyond their control.”

Urbanism and industrialism — embodied by the arrival of the railroad, which paved the way for coal mining — were the forces that disrupted the peace in the Tug Fork Valley, an Appalachian community that spans parts of Kentucky and West Virginia. The Hatfields and McCoys had been among the area’s first settlers.

Anderson, the Hatfield patriarch — also known as “Devil Anse” — was more than a generation younger than his counterpart, Randolph McCoy. Before the outbreak of the struggle, Randolph moved his family to Kentucky, away from their previous property neighboring Anderson’s in what was then Virginia.

It was the Civil War, according to the documentarians, that “ripped apart the bonds of harmony” that had existed in the valley, both “between and within families.” The creation of West Virginia out of a Union-loyal region of Confederate Virginia further divided and tested regional loyalties. Anderson and Randolph supported the rebels. But Randolph’s brothers backed the North.

The accusation that Devil Anse’s Confederate guerilla unit murdered one of Randolph’s Union-favoring siblings appears to have been the spark of enmity between the clans.

The initial confrontation escalated into a vicious cycle of murder and revenge, typified by the 27 stab wounds Ellison Hatfield suffered in 1882, and culminating with the arson of the McCoys’ home on New Year’s Day in 1888, a crime that claimed the lives of two children.

References to murder, war and poverty indicate that “The Feud” is not for kids. Adults and teens, however, will appreciate the excellent use to which MacLowry puts candid black-and-white photographs from the era — a technique he used in “The Mine Wars” as well. The soul-piercing expressions on the faces of the region’s proud, defiant people speak compellingly to viewers across the generations.

“The Feud” successfully illuminates the lasting impact the families’ senseless animosity had on succeeding generations. In part that was due to T.C. Crawford, a reporter primarily associated with the New York World.

In an 1888 series of interviews with Anderson, published by the Cincinnati Enquirer, Crawford portrayed him as “the talk and terror of the country.” Crawford’s sensationalism left the impression that the area of Appalachia that was home to the vendetta was “a barbarous, uncivilized and wholly savage region.” Crawford was convinced, moreover, that “the railroad would drive out this outlaw class.”

As a result of industrialization, the documentary asserts, Appalachians were “stripped of their identity,” and lost “control of their destiny.” If so — and given the stereotypes to which their struggle gave rise — the Hatfields and McCoys would have been far better off fighting peacefully against the forces undermining their community rather than violently attacking one another.