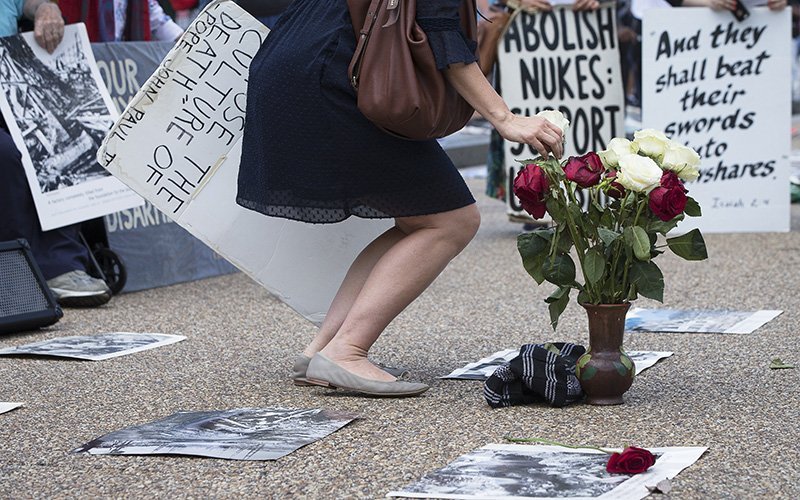 In this 2018 file photo, peace activists hold a Catholic prayer service of repentance near the White House for the use of nuclear weapons on Japan during World War II. As the encyclical "Fratelli Tutti, on Fraternity and Social Friendship” concludes, Pope Francis prays that God will "inspire in us a dream of renewed encounter, dialogue, justice and peace." (CNS photo by Tyler Orsburn)

‘Fratelli Tutti’: Being a good neighbor

The social encyclical Pope Francis released in October extends a formidable challenge to us all, the challenge to create “a different culture.” What kind of culture? It is the kind where people who basically are indifferent toward each other and deeply divided resolve their conflicts and begin to “care for one another” (No. 57).

His challenge is a tall order, to be sure. But he considers it an “urgent” need (No. 33). The encyclical’s title, “Fratelli Tutti,” means “all brothers and sisters” or “all brothers” and refers to the brotherly or familylike relationships that he envisions as the standard for such a culture.

“In today’s world the sense of belonging to a single human family is fading, and the dream of working together for justice and peace seems an outdated utopia,” the encyclical observes. “What reigns instead is a cool, comfortable and globalized indifference.” The temptation is to become isolated and to withdraw into our “own interests.”

But that is not the way to restore hope, Pope Francis makes clear. His encyclical exhorts readers, “Isolation, no; closeness, yes” (No. 30).

Very early in the encyclical he explains that he is extending this challenge “in the hope that in the face of present-day attempts to eliminate or ignore others, we may prove capable of responding with a new vision of fraternity and social friendship that will not remain at the level of words” (No. 6).

As the encyclical concludes he prays that God will “inspire in us a dream of renewed encounter, dialogue, justice and peace.” The prayer continues, “May we recognize the goodness and beauty that you have sown in each of us.”

The “conviction that all human beings are brothers and sisters” is this encyclical’s foundation. Pope Francis cautions against allowing it to “remain an abstract idea,” divorced from life’s concrete realities. He insists that when this conviction finds “concrete embodiment” it forces “us to see things in a new light” (No. 128).

The encyclical is a nearly 43,000-word text, with chapters devoted to many important concerns in 21st-century societies. But a common thread weaves together the encyclical’s numerous timely concerns related to political action, immigration, the death penalty or war, for example. It is a thread that signifies the world’s need today for a new culture of encounter.

I think that this common thread radiates as clearly as possible when the pope exclaims: “Let us arm our children with the weapons of dialogue! Let us teach them to fight the good fight of the culture of encounter!” (No. 217).

Such a culture necessarily encompasses encounters with others who are different from me or you, the pope acknowledges. This is not easy. Much easier, in the pope’s estimation, is to ignore the value of such encounters.

The “others” the pope has in mind include the poor, the stranger, the unemployed, migrants, victims of racism, members of other world religions, to mention a few. The pope is emphatic that “the dignity of others is to be respected in all circumstances” (No. 213).

The 2,000-year-old parable of the good Samaritan is this encyclical’s anchor. In the Gospel of Luke (10:25-37), the Samaritan, at real expense to himself in terms of time and money, aided a stranger encountered along the road. The injured stranger had been attacked by thieves.

Pope Francis cautions that society today must not turn “its back on suffering” (No. 65). He writes, “May we not sink to such depths!” The parable “summons us to rediscover our vocation as citizens of our respective nations and of the entire world, builders of a new social bond” (No. 66).

But “social peace demands hard work, craftsmanship,” the pope affirms. “It would be easier to keep freedoms and differences in check with cleverness and a few resources.”

Nevertheless, “such a peace would be superficial and fragile, not the fruit of a culture of encounter that brings enduring stability.” The pope comments that “integrating differences is a much more difficult and slow process, yet it is the guarantee of a genuine and lasting peace” (No. 217).

What is needed is “the ability to recognize other people’s right to be themselves and to be different,” he advises (No. 218).

This, Pope Francis clarifies, does not imply renouncing one’s own identity. Openness to others need not imply spurning our “own richness” (No. 143). For Christians, he explains, the Gospel remains essential.

He insists, “If the music of the Gospel ceases to sound in our homes, our public squares, our workplaces, our political and financial life, then we will no longer hear the strains that challenge us to defend the dignity of every man and woman” (No. 277).

The parable of the good Samaritan “eloquently presents the basic decision we need to make in order to rebuild our wounded world,” says Pope Francis. But how?

The parable, he writes, “shows us how a community can be rebuilt by men and women who identify with the vulnerability of others, who reject the creation of a society of exclusion, and act instead as neighbors, lifting up and rehabilitating the fallen for the sake of the common good” (No. 67).