The Next Three Days - Catholic Courier 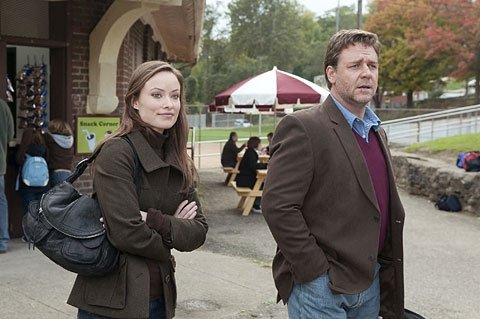 NEW YORK (CNS) — Much of moviegoing’s appeal stems from the chance to experience the improbable vicariously. But there are limits to the suspension of disbelief when it comes to dramatic thrillers that aspire to realism. In "The Next Three Days" (Lionsgate), we’re asked to accept that a literature professor at a Pittsburgh-area community college would try to break his wife out of prison.

Moreover, writer-director Paul Haggis ("Crash") embeds faulty moral logic inside this far-fetched premise. Along with certain contrivances intended to smooth over the bumpy plot, this renders the otherwise well-made "The Next Three Days" difficult to enjoy. The main problem arises not from excesses involving language, sexuality or violence, but from the endorsement of seriously wayward behavior.

Based on the 2008 French thriller "Pour Elle" ("Anything for Her"), the picture stars Russell Crowe as John Brennan, adoring spouse of Lara (Elizabeth Banks) and devoted father of toddler Luke (Ty Simpkins). Without much preliminary ado, Lara is arrested for the murder of her boss, with whom she had argued earlier in the day.

Fast-forward three years and she’s incarcerated at the Allegheny County Jail in downtown Pittsburgh. Luke is naturally despondent, but John, convinced of Lara’s innocence, clings to his faith in the legal system. When her last appeal is denied, however, he decides to spring her from jail.

After interviewing knowledgeable ex-con Damon Pennington (Liam Neeson) and then conducting extensive research on the Internet, John hatches his high-risk plan. Often leaving Luke with his parents (Brian Dennehy and Helen Carey), John engages in reconnaissance, obtains false papers and puts the family home on the market to help raise the necessary funds.

Increasingly desperate, he even robs drug dealers, a choice which goes murderously awry.

The issue of Lara’s culpability isn’t settled until the very end when the full details of the crime are revealed in flashback. A discussion of Cervantes’ "Don Quixote" during one of John’s classes, meanwhile, provides thematic background. He interprets the novel as celebrating the triumph of irrationality over reason, concluding, "Insanity is better than despair."

John’s own scheme, part fantasy, part obsession, is motivated by a laudable fidelity toward his wife that — regrettably and unjustifiably — comes to override all other considerations.

Even as this ambitious love story-wrapped-in-a-thriller culminates in an exciting chase, it’s difficult to feel more than superficial sympathy for the Brennans. Indeed, viewers may find themselves rooting for the police.

Lara’s guilt or innocence is ultimately irrelevant given John’s willingness to violate so many laws, endanger so many lives (including his own and those of several meth merchants the script treats as expendable), neglect his son and selfishly allow the interests of his family to trump everything else.

Despite his technical proficiency and the fine performances he elicits, Haggis fails to paper over the glaring ethical gaps. Arguably, he makes this tale of controlled madness in the face of injustice as plausible as anyone could, though at the cost of being transparently manipulative and immorally maudlin. The takeaway: Not everybody who tilts at windmills deserves praise.

The film contains one instance of rough language, a smattering of profanity and crass terms, some gunplay and other nongraphic violence, an off-screen suicide attempt, drug dealing and brief sexual banter. The Catholic News Service classification is A-III — adults. The Motion Picture Association of America rating is PG-13 — parents strongly cautioned. Some material may be inappropriate for children under 13.