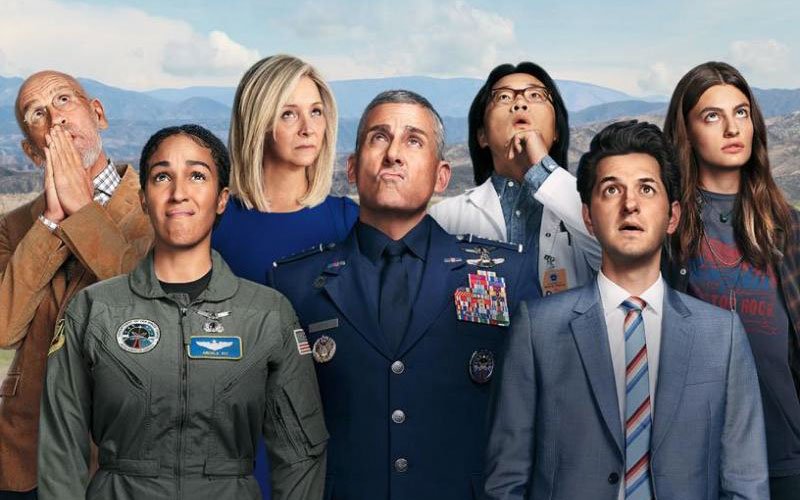 This is the TV poster for the Netflix original series "Space Force." (CNS photo courtesy of Netflix)

Fans of the popular and award-winning earlier show, which ran on NBC 2005-13, will likely be hugely disappointed in this new offering.

In addition to its aesthetic shortcomings, “Space Force” also is morally defective. The script promotes “open” marriage, for instance — albeit in unusual circumstances — thus essentially endorsing adultery. Gay and lesbian relationships, moreover, are portrayed without the discernment demanded by scripturally based church teaching.

Some illicit drug use and cartoonish violence also are included, the latter presented in the context of war games. The show also contains a high level of vulgar language and scatological and risque humor, which is sometimes gratuitous and offensive.

Despite Mark’s promotion, it’s his principal rival, Gen. Kick Grabaston (Noah Emmerich), who snags the coveted position of chief of staff. This development factors into Mark’s reluctant decision, a year later, to accept the post of commander of the newly formed Space Force.

An old North American Aerospace Defense Command (NORAD) facility in Wild Horse, Colorado, serves as the fictitious headquarters for this latest branch of the armed services, established in real life by the Trump administration in December 2019. One of the series’ rare genuinely funny moments comes as Mark comments to Maggie, “I can be flexible if I’m ordered to be.”

When Mark relocates to Wild Horse, only Erin accompanies him. For reasons not explained to viewers, Maggie is serving 40 years in a federal prison.

The estimable John Malkovich, his considerable talent wasted here, portrays chief scientist Dr. Adrian Mallory, who advises Mark against Space Force’s plan to launch a satellite called Epsilon 6. This aspect of the story throws into doubt how fully the writers understand the mission of the military’s newest arm, which they seem to confuse with that of NASA.

Other incidents include Mark’s stint in an experimental habitat where the only available food is potatoes. He’s also seen testifying before a congressional committee, one of whose members is Latina Congresswoman Anabela Ysidro-Campos (Ginger Gonzaga).

With her repetitive questions about people on food stamps, Ysidro-Campos is a none-too-subtle stand-in for New York Democratic Rep. Alexandria Ocasio-Cortez.

Numerous actors instantly recognizable to sitcom fans lend their luster to the series.

Patrick Warburton, Puddy from “Seinfeld,” plays the commandant of the Marine Corps; Jane Lynch (“Glee”) is the chief of naval operations; while Diedrich Bader (“The Drew Carey Show”) takes on the role of another Chiefs of Staff member, Gen. Rongley. Even the late Fred Willard appears as Mark’s father.

But this illustrious supporting cast can’t rescue “Space Force.” Neither can Carell.

In dramatic roles — the eccentric and pathological billionaire John du Pont in 2014’s “Foxcatcher” comes to mind — Carell commendably stretches himself beyond his usual boundaries. But as a comic actor, he always seems compelled to strain to get viewers’ attention.

Perhaps sensing how bad his material is, Carell works overtime to impress here. He barks dialogue in a labored, raspy voice that makes him sound like a caricatured version of Frank Sutton’s irascible Sgt. Carter on the 1960s sitcom “Gomer Pyle, USMC.”

Together with its ethically problematic elements, the few laughs to be reaped from “Space Force” make it less than rewarding entertainment. While the show builds toward a cliffhanging climax, viewers would do well to step away from the precipice.