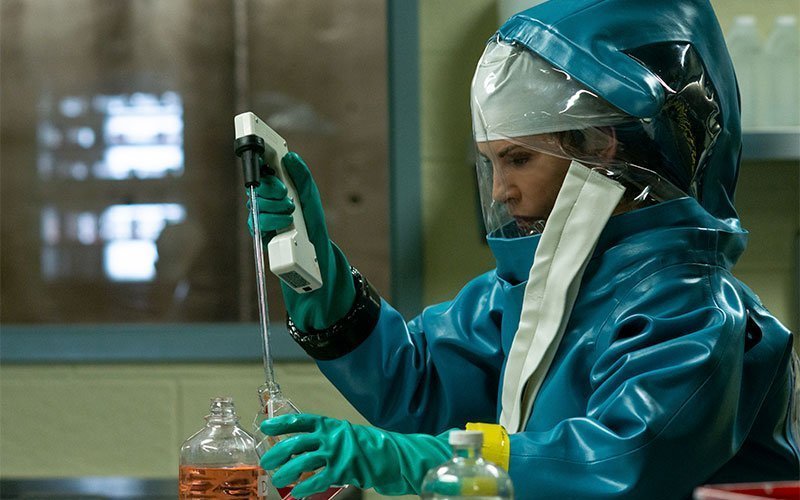 The setting alternates between 1976 Zaire and 1989 suburban Washington. The show depicts how efforts to contain one of the Ebola virus’ initial outbreaks in what is now the Central African Republic informed the Army’s efforts to contain the spread of the disease at Hazelton Laboratories, an animal research facility in Reston, Virginia, over a decade later.

As the series opens, Nancy, arriving at the Army Research Institute for Infectious Diseases facility at Fort Detrick in Frederick, Maryland, is informed by her civilian virologist colleague, Peter Jarhling (Topher Grace, “That ’70s Show”), that Hazleton has sent them a sample from one of the Rhesus monkeys they use in their research.

Jarhling is confident the specimen will show evidence of simian hemorrhagic fever. But, after testing it, Nancy suspects it’s a strain of Ebola — a filovirus with a 90 percent mortality rate. Nancy realizes she’ll need the help of her mentor, Wade Carter (Liam Cunningham), to develop a plan to combat the infection.

Wade, now living reclusively on Cape Cod, had been on the ground in Zaire when the pathogen was first discovered in the Ebola River Valley. But he had been discredited by his overzealousness and had gained a reputation as, in Jarhling’s words, “a pathogen-chasing whack job,” who “went off the deep end.”

Flashbacks to Carter’s time in Africa working with his International Disease Control colleague, Trevor Rhodes (James D’Arcy), slowly reveal the fundamental, grievous disagreement between the men, and illustrate how Carter acquired his dubious renown. The enmity between them also complicates — and threatens to undermine — efforts to contain the American outbreak.

Now an official at the national Centers for Disease Control, the hyper-cautious Rhodes is concerned about triggering a panic, especially given the public’s unease about the AIDS epidemic. His wariness leads to a renewed clash with his old rival and to tension with Nancy, to whom he was also once a mentor.

To enact her plan to euthanize Hazleton’s monkeys and carefully monitor any of its employees who had contact with them, Nancy will need to manage Carter and Rhodes’ fraught relationship deftly.

Some sensuality and mildly off-color language are included in the otherwise admirably restrained script. The series isn’t for the squeamish, however. The graphic, though not lurid, images of people contending with a hideous virus aren’t easy to watch, nor are the scenes of soldiers struggling to put down the poor monkeys — who put up fierce resistance.

A pivotal moment in the “The Hot Zone,” moreover, turns on a so-called “mercy killing.” Protests that “it wasn’t your place to take a life” do echo church teaching on the subject. Even so, mature discernment is required to evaluate this aspect of the story.

These elements, coupled with the discussions of AIDS in the dialogue, make “The Hot Zone” best suited for grownups well-grounded in their faith.

Viewers will particularly appreciate the military heroism on display — all the more so since the series’ premiere coincides with Memorial Day. While sacrifices made at the front are often celebrated, “The Hot Zone” salutes the hard, dangerous and truly thankless work the Army frequently carries out behind the scenes.

“The Hot Zone,” like the recent HBO miniseries “Chernobyl,” also highlights the importance of scientists, reminding its audience that we ignore their warnings at our peril. As Nancy says in the program’s coda, hot viruses are the “natural consequence of humanity encroaching upon previously undisturbed environments.”

With its moments of sheer terror as well as surprising tenderness, “The Hot Zone” will make viewers’ hearts rush even as it moves them. It will also likely inspire serious reflection on the vital issues it showcases.