The origins of evil are varied, but less so for the new show 'Evil' - Catholic Courier 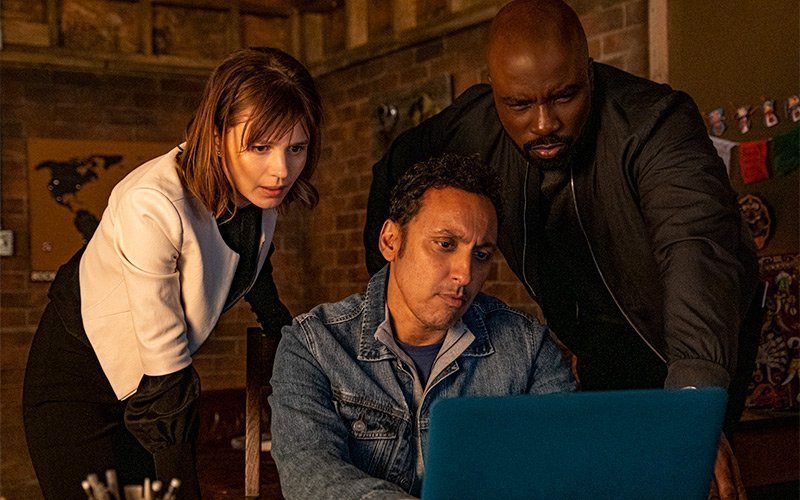 Katja Herbers as Kristen Bouchard, Aasif Mandvi as Ben Shakir and Mike Colter as David Acosta in a scene from "Evil". (Photo by Jeff Neumann/CBS)

NEW YORK (CNS) — The questions of what makes people do evil things is explored in the new CBS series “Evil” from the husband-and-wife team of Robert and Michelle King, the creators of “The Good Wife” and “The Good Fight.”

The show’s genesis comes from many discussions the couple have had over the course of their 32-year marriage about what causes people to do evil things. Robert, a devout Catholic, believes original sin has a lot to do with it and Michelle, an agnostic Jew, takes a more human-based, mental health approach.

“Evil” follows a team of three people tasked with exploring the Catholic Church’s backlog of requests for exorcisms or investigation of possible miracles. The team includes David Acosta (Mike Colter), a seminarian — referred to in the show as a “priest-in-training”; Kristin Bouchard (Katja Herbers), a former Catholic and forensic psychologist who doesn’t believe in the supernatural; and Ben (Aasif Mandvi), a blue-collar contractor who thinks science can explain everything.
Asked during an interview at a screening of the “Evil” pilot episode at the Sheen Center in New York City what they hoped the show would contribute to the cultural conversation about evil, Michelle King said, “It’s less about content but more about the tone. I hope the show helps people speak to each other respectfully because the characters listen to one another even though they don’t have the same point of view. I hope the show encourages (respectful listening) because there’s not as much listening that is helpful right now.”

Robert King said he hopes the show will help people acknowledge that religion is part of the fabric of the universe. “The problem is that TV’s cliche about religion is that it’s somehow going to turn villainous,” he said.

“That’s not going to happen here.” Michelle added, “In this show, for example, the second episode starts with prayer. That’s going to be the fabric of this show. You’re not going to see a mockery of religion because we won’t have it.”

The Kings, together with seven other writers, are careful to draw on the expertise of consultants from both the Catholic Church and the field of psychology.

During the Sheen Center event, Msgr. Donald Sakano, a priest of the Archdiocese of New York and a consultant on the show, talked about his visit to the set and some of the questions the writers had for him. One actor who plays a priest wanted to know about how to carry himself as a priest who is called upon to perform an exorcism.

Chitra Raghaven, the psychology consultant, actually got the writers to include comments about having to pay off student loans, even years after graduating, because that’s reality for many in the mental health profession.

When asked why they named the show “Evil,” Robert replied that “The Good Wife” — despite its seven-season run and award haul including several Emmys and a Peabody Award in 2010 — suffered from its title, saying that some men didn’t want to watch a show called “The Good Wife.” He said, “We wanted to have a provocative title but above all it’s the subject matter that interests us.” Smiling, he added, “But the show’s not all about the bad stuff.”

The Kings aim to offer viewers a show that defies genre labeling. As with “The Good Wife,” “Evil” will cross genres, making the show anything but a typical procedural. It includes investigative elements with supernatural ones plus a bit of thriller-horror mixed in.

When asked why they chose to focus on paranormal or supernatural manifestations of evil rather than more real-life evil, Michelle said, “Stay tuned. It’s all there. There’s very much evil with a small ‘e’ such as an episode with an evil boss.” Robert added, “The supernatural is interesting to people right now. We’re not here to preach but to entertain. If the show can help people think more about what’s happening in the daily news, that’s all good.”

Some Catholics may be wary of a TV show called “Evil,” but Michelle voiced her hope that people will watch the show long enough to see how respectful it is. Acknowledging that some may find it disconcerting, Robert says, “There’s a subset of people in religion who believe that any entertainment is not of God. I think when you look at the novels or short stories of Flannery O’Connor or Graham Greene, the bottom line is these are very holy people who are using entertainment to examine life and are willing to be challenging in their stories.”