The Other Guys - Catholic Courier 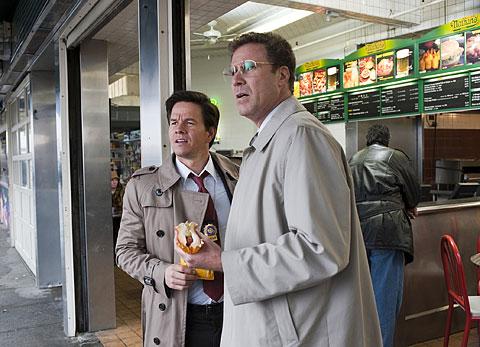 Ferrell is New York Police Department Detective Allen Gamble, a paperwork-loving forensic accountant whose idea of a fulfilling workday involves tracking down construction permit violations from the safety of the squad room.

Observing him disdainfully from the next desk is his frustrated perforce partner Terry Hoitz (Wahlberg). A former street cop unwillingly office-bound after making a high-profile mistake, Terry longs to get out of the precinct house and bring the bad guys to their knees, and he seldom passes up the chance to put quirky, soft-spoken Allen in his place.

A surprising opportunity to make a major bust arises, however, when Allen’s numbers crunching and detail sifting suggest that famed British-born banker David Ershon (Steve Coogan) has been engaged in massive financial shenanigans.

To his credit, director and co-writer (with Chris Henchy) Adam McKay — Ferrell’s longtime collaborator — handles the predictable series of car chases, explosions and gunfights that follow with restraint. Though the bullets fly by the hundreds, blood goes unspilled, and only one character meets a somewhat jarring end.

No such reserve is shown, though, when it comes to including edgy sexually themed material in this parody of genre conventions. Thus, when Allen’s wife Sheila (Eva Mendes) turns out to be unexpectedly attractive, Terry openly lusts after her to supposedly humorous effect.

Equally misguided is a scene in which, with Allen in hiding, Sheila’s elderly mother serves as a go-between for the spouses, carrying back and forth distastefully detailed messages about the outlandish lovemaking activities they yearn to be engaged in with each other.

The film contains considerable, though bloodless, action violence; much sexual humor; a couple of uses of profanity; and pervasive crude and crass language. The Catholic News Service classification is O — morally offensive. The Motion Picture Association of America rating is PG-13 — parents strongly cautioned. Some material may be inappropriate for children under 13.