The parent's dilemma: What to watch with the kids? - Catholic Courier 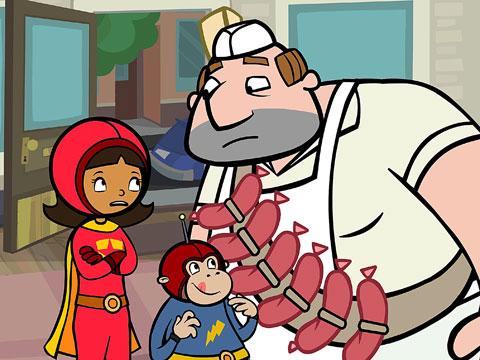 A scene from the PBS cartoon "Wordgirl."

WASHINGTON (CNS) — I was asked in late April by a parent in Asbury Park, N.J., “What shows are good for a family to watch?” Complicating the issue: “My children are ages 4 to 14.”

That’s a tall order indeed. What shows will the youngest children enjoy but not bore their elder siblings? What shows will children of any age watch that will keep a parent from being on edge — or go over the edge — because of content?

One easy recommendation is one I’ve issued before: Fox’s “American Idol.” Parents may want to avoid the tryout installments before the actual competition, because some of those who don’t get picked become sore losers whose comments get bleeped.

But the actual competition episodes, when as many as 24 hopefuls are vying to survive yet another week, make for fairly involving viewing. They are also seen by upward of 20 million people or more twice each week. After nine years, it has become such a thoroughly ingrained part of the country’s pop culture that even those who haven’t seen every minute of every show have at least a passing familiarity with the concept, if not with the contestants.

It’s water-cooler talk for grown-ups, and youngsters have the opportunity to present their own arguments about why one contestant succeeded while another failed.

Best of all, it’s rated TV-G under the TV Parental Guidelines ratings system.

Therein lies the rub. Over-the-air commercial broadcast television is not in the habit of airing shows with a TV-G rating. Fox’s summer perennial, “So You Think You Can Dance,” may get TV-G ratings, but much of the rest of its lineup carries well-earned parental advisories before each episode.

The other networks are no better, from CBS’ crime dramas to the mishmash of prime-time programming on ABC, NBC and the CW.

PBS may offer quality programming, but some of the documentaries may be too — what’s the word? — boring for the youngest kids to watch. However, I’ve been impressed with two PBS series geared toward young people.

One is “The Electric Company.” It’s not the same show that debuted about 40 years ago. This version applies a slightly different format in order to bring its educational lessons home, including a story with an honest-to-goodness plot, and several shorter sketches between scenes. One of my favorites is a “human beatbox” who grunts and spits percussive backing while someone else explains the consonant blend or grammar principle featured in that episode.

The other is a cartoon, “Wordgirl.” While not nearly as subversive as the animated classic “Rocky and Bullwinkle” cartoons of a half-century ago, “Wordgirl” is like “Rocky and Bullwinkle” in that kids and adults can enjoy it simultaneously but on separate levels. “Wordgirl” aims to build its young viewers’ vocabularies with each episode, and the voice talent (including some moonlighting “Saturday Night Live” actors) is superb.

I’ve even caught myself watching it when my daughter isn’t home. I don’t think it’s going to take much convincing to have a family outing at the nearby minor-league ballpark for its “Wordgirl” Day pregame show later this season.

Cable TV is its own can of worms. The cable audience is deliberately fragmented to appeal to narrow audience groups. If everyone in the house can appreciate the same professional sporting event, great — at least until it’s bedtime. If everyone can enjoy the same talking-head news and commentary, more power to you. If everyone digs the same reruns, then you’ve struck gold.

It’s possible that the TV can be merely a delivery device for the family collection of DVDs and VHS tapes, or those you rent. If the program is already in your possession, then you presumably have an idea as to its content. With entire seasons — and entire series — of shows available on DVD, children and parents alike can see the material they want to see and not have to worry about languishing through 15 minutes on average of commercials and network promos every hour.

If family togetherness is that important, then making such decisions requires input from all family members. Remember, too, that even fare that’s less than ideal need not permanently harm young minds if parents talk with their children about what they’ve just seen.

What do you see when you watch TV? What are your likes or dislikes? What are your concerns and criticisms? Be as general or as specific as you wish. Send your comments to: Mark Pattison, Media Editor, Catholic News Service, 3211 Fourth St. NE, Washington, DC 20017.