The people begin to worship a golden calf - Catholic Courier 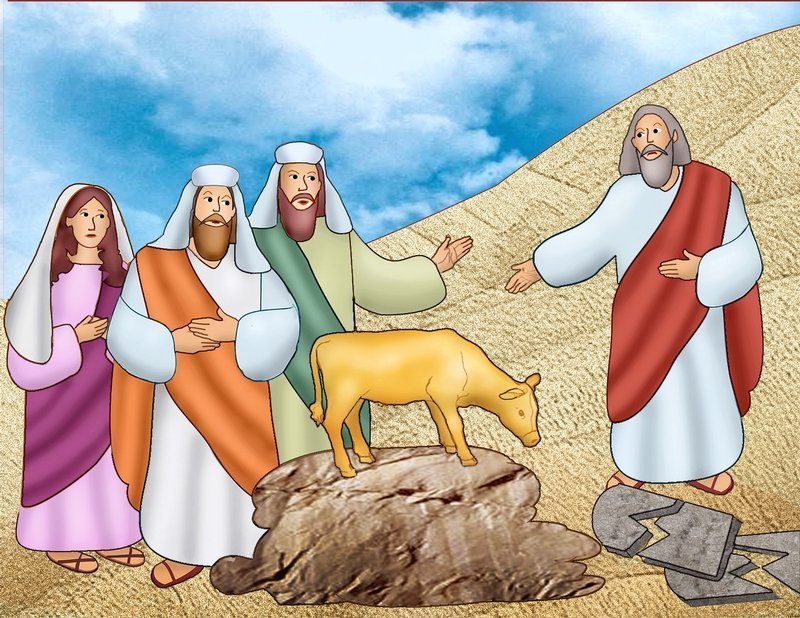 The people begin to worship a golden calf

The people begin to worship a golden calf

Moses went up the mountain to talk to God. He was gone a long time, which worried the Israelites.

They went to see Moses’ brother, Aaron, who was in charge of the Israelites’ camp while Moses was away.

“Come,” they said to Aaron, “make us a god who will go before us; as for that man Moses who brought us out of the land of Egypt, we do not know what has happened to him.”

Aaron told the people to give him their gold earrings. He put the gold into the fire and used the hot metal to make a statue of a calf. The people began worshipping the calf as their new god.

God saw all that was happening at the Israelites’ camp at the base of the mountain. He told Moses about the golden calf.

“Go down at once to your people, whom you brought out of the land of Egypt, for they have become depraved,” he said to Moses.

God was angry and decided to destroy the Israelites and make a new nation from Moses.

“Why, O Lord, should your wrath blaze up against your own people, whom you brought out of the land of Egypt with such great power and with so strong a hand?” Moses asked. “Remember your servants Abraham, Isaac and Israel, and how you swore to them by your own self, saying, ‘I will make your descendants as numerous as the stars in the sky; and all this land that I promised, I will give your descendants as their perpetual heritage.'”

So God changed his mind and decided not to destroy the people.

When Moses came down the mountain, he was carrying two stone tablets upon which God had written his laws for the people to follow. When Moses saw the people laughing, dancing and worshipping the golden calf, he was so angry that he threw the tablets on the ground, breaking them. He then destroyed the calf in the fire.

On the next day Moses said to the people, “You have committed a grave sin. Now I will go up to the Lord; perhaps I may be able to make atonement for your sin.”

So Moses went back up the mountain to once again talk to God.

1. Who was left in charge when Moses was gone?

2. What did Aaron make for the people?

In the Bible, we read about how God’s people sometimes strayed away from following him.

For example, on the way to the Promised Land, the Israelites sinned against God with their complaining and once even began worshipping a false god.

Great kings who found favor with God sometimes strayed. King David, for example, killed a man so he could marry the man’s wife. King Solomon married many pagan women who got him to worship false gods.

In Luke 15, Jesus told the parable of the prodigal son, who wanted his father’s inheritance so he could leave home. The son spent all of his money foolishly. He was embarrassed to go home to his father, but he did because he was hungry and homeless. To the son’s surprise, his father greeted him with love and forgiveness and wanted him to be part of the family again.

Also in Luke 15, Jesus told the parable of the lost sheep. He said a shepherd would leave his 99 sheep to go find the one sheep that had strayed from the flock. Likewise, Jesus said, there would be more joy in heaven over one sinner who repented and returned to God than over 99 righteous people who were already following God.

Even though people may stray away from God, he always loves them and wants them to repent and return to following him.

St. Michael was the duke of Chernigov, Russia. Pagan barbarians invaded the country during the 13th century. Michael at first ran away, then he returned to save his people from the violence.

He went to the enemy’s camp, and the leader made many promises to Michael if only he would deny his faith. He refused, so the invaders tortured and beheaded him. A noble who was with him, St. Theodore, suffered the same fate. We remember both men on Sept. 21.