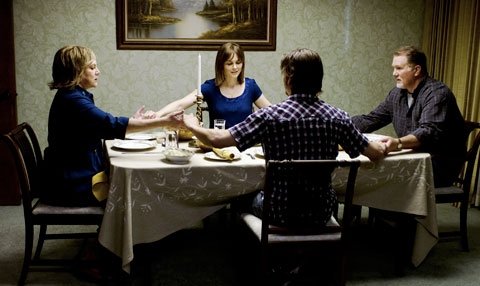 NEW YORK (CNS) — A more appropriate title for "The Perfect Family" (Variance) would be, "The Year’s Most Virulently Anti-Catholic Movie."

Staged by newcomer Anne Renton (director) and screenwriters Paula Goldberg and Claire V. Riley, this dramedy ridicules just about every aspect of the Catholic Church, its teachings and members, offering broad caricatures of clergy, religious and laity to score negative points.

Eileen Cleary (Kathleen Turner), supermom and "ultimate Catholic," is the altar server at Mass, assisting Msgr. Murphy (Richard Chamberlain, channeling his Father de Bricassart role from "The Thorn Birds"). It’s time for Communion, and Eileen holds a vessel of consecrated hosts. The monsignor turns to her, takes a host, then turns to the communicant and offers the Eucharist.

That detail — entirely alien, of course, to the reality of Catholic liturgy — is a pretty good hint that no one involved in this bilious project has any familiarity whatever with the life of the church they’re attacking.

Distracted, Eileen brushes lint from her server’s robe, jostles the platter, and several hosts fall to the ground. She proceeds to kick the body of Christ under the altar so the monsignor will not notice what’s happened.

"The Perfect Family" sinks even lower. The parish announces the "Catholic Woman of the Year Award," setting up a vicious rivalry between Eileen and a den of superficially pious vipers. The award will be presented by the archbishop of Dublin, who will bestow the "prayer of absolution" on the winner, wiping away all her sins.

In the Catholic Church that actually exists, of course, absolution — at least of mortal sin — requires sincere and sacramental confession (unless the airplane is going down), and is not some kind of booby prize.

The award committee is headed by a mean-spirited nun — is there any other kind? — Sister Joan (Rebecca Wackler), who insists on a thorough examination of the potential honoree’s family and marriage. "What makes a nun an expert on marriage?" one candidate snipes.

Eileen is considered a shoo-in ("Who leads a more divine life than you?" her friend asks) until layers of deception are slowly peeled away, and Eileen desperately tries to conceal the cracks in her perfect image.

You see, her daughter, Shannon (Emily Deschanel), is a lesbian, pregnant and getting "married" in a week. Her son, Frank Jr. (Jason Ritter), has left his wife and is having an affair with a manicurist. And her husband, Frank (Michael McGrady), is a recovering alcoholic and philanderer.

Challenged by her daughter to ignore the pope and decide for herself what’s right and wrong, Eileen barks, "I don’t have to think! I’m a Catholic!"

It gets worse. Shannon is wed, on the sly, by Father Joe (Scott Michael Campbell), a Catholic priest. Father Joe eventually counsels Eileen to lighten up, noting that God simply wants us "to do the best we can," with or without the church’s help.

Predictably, Eileen’s redemption only comes when she throws off the shackles of the wicked institution and embraces her truly "perfect" family, warts and all.

The film contains pervasive anti-Catholic prejudice, sacrilegious humor, a benign view of premarital sex and homosexual acts as well as of same-sex marriage, an abortion theme and some rough language. The Catholic News Service classification is O — morally offensive. The Motion Picture Association of America rating is PG-13 — parents strongly cautioned. Some material may be inappropriate for children under 13.