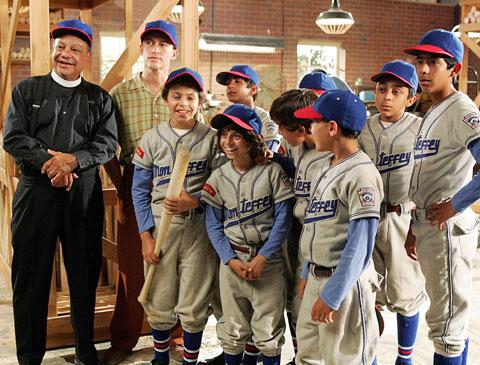 NEW YORK (CNS) — As the universal church’s Year for Priests nears its conclusion June 19, and as the overwhelming majority of dedicated Catholic clergy around the world once again find themselves smeared — in some quarters at least — for the grievously sinful misdeeds of a few, who would have guessed that an entirely warmhearted and positive embodiment of the priesthood would be portrayed onscreen by comedy veteran Cheech Marin?

Marin — a long way from his persona as a doped-up dope in the Cheech and Chong string of stoner comedies — plays Padre Esteban, the spiritual guide of a ragtag boys’ baseball team from northern Mexico whose unlikely bid for sports immortality is recounted in the faith-infused, fact-based drama "The Perfect Game" (IndustryWorks).

Set in 1957, this is the story of an enthusiastic but initially unskilled group of youngsters, led by their future star pitcher, Angel Macias (Jake T. Austin), who enlist the reluctant help of local factory worker and ex-major leaguer Cesar Fez (Clifton Collins Jr.) to form the Monterrey Industrials, their downtrodden city’s first Little League team.

Improving rapidly under coach Cesar’s hard-driving regime, the lads cross the border and embark on a series of David-versus-Goliath-like victories over their far more advantaged opponents in the Little League championship tournament.

As directed by William Dear, W. William Winokur’s script unambiguously presents the young players’ Catholicism as the inspiration for their winning streak. Thus Marin’s devout but down-to-earth padre leads the team in prayer before each game, and uses the story of Blessed Juan Diego to encourage them to accomplish great things.

Their beliefs also prompt the boys’ persistent refusal to allow either their impoverished circumstances or the disdainful prejudice they frequently encounter during their time in the U.S. to deprive them of their dream. In a touching scene that reinforces the film’s message about racial and ethnic equality, they courageously defy the rules of a segregated diner by joining, and befriending, a solitary black Little Leaguer who has been forced to eat at a table by himself, shunned by his own white teammates.

A brief scene of the otherwise estimable Padre Esteban celebrating a Tridentine Mass makes it clear that no one involved in the production had even a rudimentary knowledge of the Catholic liturgy of the time, and the result is an image of worship so sloppy and repetitive as to approach unintentional parody.

But this is a relatively small flaw in what is, overall, a rousing tribute to the power of religious faith and the values of persistence and human solidarity.

The film contains racial tensions, ethnic slurs and a few mildly earthy insults. The USCCB Office for Film & Broadcasting classification is A-II — adults and adolescents. The Motion Picture Association of America rating is PG — parental guidance suggested. Some material may not be suitable for children.