The poor are affected by environmental factors - Catholic Courier 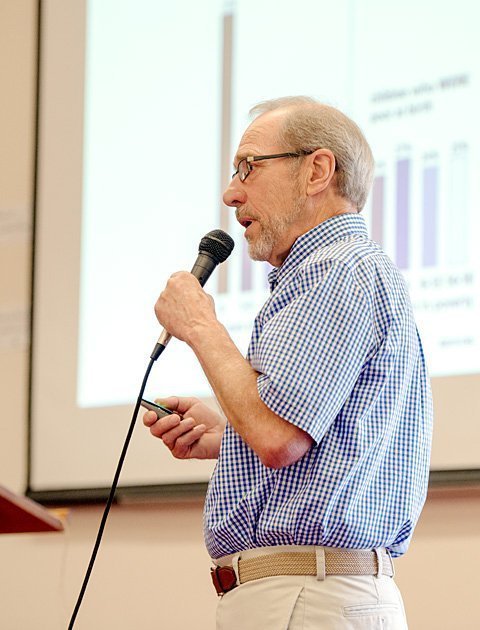 John Strazzabosco gives a presentation on the generational effects of poverty at Notre Dame Retreat House in Canandaigua during the Diocesan Social Ministry Conference May 9.

CANANDAIGUA — The tranquil setting of the Notre Dame Retreat House set the perfect stage for an in-depth discussion about the connection between caring for the earth and for the poor.

The poor often live in areas affected by weather disasters and are most vulnerable to its economic effects, from not having flood insurance in low-lying areas to being left homeless following a mobile home park’s destruction after a tornado, said Ruth Putnam Marchetti, Catholic Family Center’s parish social ministry coordinator, who helped organize the Diocesan Social Ministry Conference on May 9.

“This is not just about being uncomfortable in the summer or warmer winters,” she said. “What happens to the poor?”

And whether climate change is happening should cease to be a debate, since 98 percent of the world’s scientists agree that it is occurring, concurred Marchetti and guest speaker Dr. Gerry Gacioch.

The hope is that by raising awareness of the connection between climate and poverty, Catholics and non-Catholics alike will heed Pope Francis’ focus on the moral imperative to address climate change, Gacioch added. He is a cardiologist with Rochester General Health System who serves on the United States Conference of Catholic Bishops’ Climate Change Covenant.

An encyclical on climate change from Pope Francis is expected this summer, he said.

But the concern for the environment and how it affects the world’s poor has gone back many popes to Pope Paul VI, Gacioch noted.

“The popes have been very consistent” on the need to address climate change as a Christian responsibility to care for the earth and its people, he said.

Thus, Catholics have a moral imperative to lead the efforts to “go green,” he said. Two of the seven themes of Catholic social teaching are “option for the poor and vulnerable” and “care for God’s creation,” Gacioch pointed out.

But the challenge in getting mass support for addressing climate change, Gacioch said, is that people confuse climate with weather. In Rochester, the winter may have been the coldest in many years but the global temperature was the hottest on record, he said.

And with no action taken, the earth will be 5 degrees warmer by 2100 and could find many areas under water, he said.

Parishes are encouraged to help prevent that from happening by reducing their carbon footprint, Gacioch explained. Ways in which to do this include considering solar panel options where possible, growing vegetable gardens and advocating for people to eat a plant-based diet. Parishioners also may sign up for the St. Francis Pledge to pray, act and advocate to solve climate change (www.catholicclimatecovenant.org/pledge).

Doing nothing is not an option, he noted.

“People on the margins can’t adapt to (climate change),” Gacioch said. “They will be in trouble.”

The poor also will face trouble of a different kind if local residents do not do more to address some of the fundamental causes of poverty, Jerry Strazzabosco explained during his presentation, “Anatomy of Poverty.”

Since most people understand the external socioeconomic factors of poverty, he said, he focused his talk on two aspects of generational poverty: the mind-body factor and the impact of language.

He had a glimpse of what it’s like to go through an economic challenge when his marriage faltered and he had to support two households, Strazzabosco said.

“That kind of situational poverty is painful and gut-wrenching,” he said. “But when you have generational poverty, with two or three generations, something happens. A trap door closes. You’re in it and it’s very, very difficult to get out.”

Children born in poverty are more persistently poor and more likely to be poor when they grow up, he said, so Strazzabosco said he decided to find out what can be done to break the cycle.

He found research that showed that the “telomeres” needed for new cells to replicate and replace dying ones were 19 percent shorter in poor children than children who don’t grow up in poverty. Telomeres are like the tips of a shoelace and protect the ends of chromosomes from deterioration, according to http://learn.genetics.utah.edu/content/chromosomes/telomeres/. Additionally, early social experiences shape the on-off switch for genes and affect the brain’s ability to handle stress as well as build synapses and fire up neurons, Strazzabosco said of what he has learned from the research he has found.

So, depression, abuse, fear, a lack of nutrition, a lack of healthy activities all play a role in how brain cell circuits develop or fail to do so, or might even be “pruned away,” Strazzabosco said.

“We’re changing the physiology of the brain depending on what goes into the brain,” he said.

Chronic stress is another major factor affecting the brain’s production of the stress hormone cortisol, which helps a person deal with a variety of situations, Strazzabosco explained. If a person becomes overloaded with stress, the brain becomes unable to regulate the cortisol, he added. A person’s inability to control stress can have a negative impact on the brain’s executive functions, such as memory, planning, flexibility and impulse control.

The physiological factors help explain why some people in poverty are not able to thoughtfully process multiple decisions they may need to make, Strazzabosco noted. But their executive functions can be restored with proper help because the brain is now believed to be somewhat plastic in nature, which is referred to as neuroplasticity, he added.

“Much of this damage done with executive functions is caused in poverty by the driving force of survival, Strazzabosco said.

And the notion that the poor are less intelligent than those in higher-income groups is a stereotype, he added. He noted that the information he gleaned from research on language shows how exposure to information or the lack of such exposure at an early age helps explain achievement gaps in children in different socioeconomic groups.

Children of parents in poverty learn only a quarter of the more than 2,400 words an hour that children of professional parents hear during their early formative years. This information came out of a study conducted by two University of Kansas researchers, Betty Hart and Todd Risely, Strazzabosco said. Even when intervention was provided to help the children match their counterparts, the same word gap returned when the students reached elementary school, he said. So, providing additional interventions when students begin school is another area that could be addressed, he said.

“By grade 3, reading scores are used to determine the number of prison units built,” he cited from a 2007 Children’s Defense Fund article. “Isn’t that a sad state of affairs?”