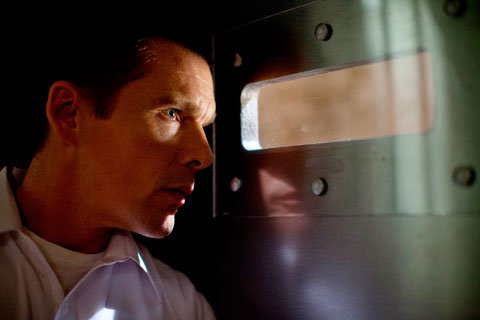 NEW YORK (CNS) — Not for the first time, a movie arrives in theaters that ostensibly criticizes some base aspect of human nature, yet winds up appealing to — and playing on — precisely that negative quality. The example at hand: writer-director James DeMonaco’s thriller "The Purge" (Universal).

In the dystopian future America of the film’s setting, those overtones surround the civic ritual of the title, an annual event during which, for one night, any crime may be committed with impunity. Television announcers and others acclaim as "blessed" the creators of this bizarre holiday from the law, and identify them as the nation’s new Founding Fathers.

Advocates of the purge maintain that it allows the citizenry to get out their aggressions in a controlled way, even as it culls the human herd of Darwinian undesirables, e.g. the poor and the frail. Among those riding the bandwagon — or drinking the Kool-Aid — is James Sandin (Ethan Hawke), a home-security specialist who profits mightily from his neighbors’ yearly fear of the sanctioned chaos.

No sooner are the Sandins are all locked in for the dreaded night, however, than Charlie’s compassion gets the better of him. Begged for shelter by a wounded and terrified stranger (Edwin Hodge), Charlie lifts the steel ramparts just long enough to admit him.

Charlie’s good deed is not to go unpunished: The masked leader (Rhys Wakefield) of the mob who targeted the newcomer is soon at the door, demanding that their prey be given up. Otherwise, he threatens, the whole family will face a gruesome end together with the fugitive. (James’ vaunted security system is not, it turns out, the impenetrable shield it’s cracked up to be.)

These developments set up an intriguing moral quandary, all the more so since the adult Sandins are, as the dialogue of an earlier scene has revealed, ambivalent about the purge. Though they reflexively approve of the tradition, peaceable James and Mary have never felt the need to participate in it.

Now that the purge has come to them, will they resort to the violence they’ve long evaded to subdue their unwanted guest and hand him over to his fate?

That might have served as the crux of an interesting picture. Instead, cheap class-warfare points are scored by ramming home the contrast between the hunted, a homeless black veteran (notice his dog tags!), and the hunters, crazed preppies wearing blazers and such.

Then the mayhem, disturbing enough from the start, rises to splatter-flick level with the audience egged on to cheer for the "good guys" as they defend themselves by mowing down their opponents.

The classical philosopher Aristotle (384-322 B.C.) held that the purpose of tragedy was to arouse feelings of pity and fear in those observing the spectacle to bring about a catharsis or purge of those emotions. Like many a movie before it, and like many yet to come, no doubt, "The Purge" is designed to evoke very different emotions in its viewers with a far less elevated — but probably more profitable — end in mind.

The film contains excessive graphic violence, including torture, a scene of underage sensuality, a few uses of profanity and of rough language and a couple of crass terms. The Catholic News Service classification is O — morally offensive. The Motion Picture Association of America rating is R — restricted. Under 17 requires accompanying parent or adult guardian.