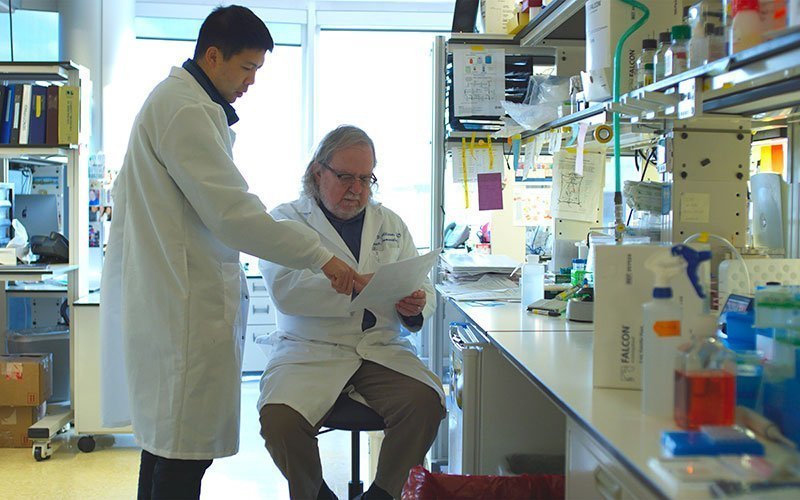 Jim Allison discusses a paper with a research associate in their lab. (Photo courtesy of Uncommon Productions)

NEW YORK (CNS) — With cancer taking almost 600,000 lives annually in the United States, it’s the rare person who hasn’t had a family member or close friend affected by the disease. Viewers seeking good news about the nation’s second-leading cause of death should tune into “Jim Allison: Breakthrough.”

The film, which had a theatrical release in September 2019, was produced, written and directed by Bill Haney. The singularly imaginative approach he adopts befits his iconoclastic subject. And it’s equally apt that this profile of a research scientist who hails from Alice, Texas, should be narrated by fellow Lone Star State native Woody Harrelson.

The opening shot of a chubby, bespectacled senior citizen with a scruffy gray beard and his canvas tennis shoes propped up on a desk as he spiritedly plays a harmonica will immediately tip viewers off to the fact that this is a different kind of documentary. Now in his 70s, this supremely casual figure is, of course, Allison himself — co-winner of the 2018 Nobel Prize for Medicine.

As an 11-year-old, Allison was devastated by the death of his mother, Constance, from lymphoma. The immunologist recalls it “left a big hole,” but it was “comforting to have a harmonica.”

Touching home-movie images of Constance at the seaside cradling her infant son on her hip as gentle waves lap at her ankles will charm viewers. They also underscore the devotion between mother and son that was to inform the latter’s consuming drive to cure cancer as an adult.

After arriving at the University of Texas, Austin in the 1960s, Allison met his first wife, Malinda, who says he was “the most amazing thing I’ve ever seen in my life.” It was during his student days in the state capital as well that the semi-professional musician first became enamored of Willie Nelson’s music.

Determined to figure out “how the immune system works,” Allison took up posts in San Diego, Houston and eventually at the University of California at Berkeley. His first breakthrough came in 1977 when he identified the T-cell receptor, which helps our immune system distinguish between healthy and threatening cells.

Despite his advances, other researchers viewed immunology as “pseudo-science.” As a result, his former Berkley student Max Krummel observes, working in “Jim’s lab had a feel of being in a pirate ship.” Yet Allison persevered and in 1996 developed his biggest innovation: an antibody that stopped the protein CTLA-4 from interfering with the ability of T cells to attack cancer.

The drug Ipilimumab was the happy fruit of the immunologist’s labors. But it took 15 years before it won approval in 2011. Allison’s “single-mindedness” during the interval cost him his marriage to Malinda.

Haney traces the real-world effects of Allison’s work by recounting the case of Sharon Belvin, an athletic 22-year-old college student afflicted with advanced melanoma. Having participated in the first trial of Ipilimumab in 2005, Belvin is now cancer free. Her 2006 meeting with Allison is one of the documentary’s best moments. “Now,” he says, “she has a family, two kids, two beautiful kids.”

Given its weighty subject matter, this is not a program for kids. But the show is suitable for grown and teen viewers, despite scenes of fairly heavy social drinking and references to divorce and illicit drug use.

Some viewers may wonder why Haney focuses so much on Allison’s love of music when it doesn’t seem all that connected to his research. Yet, by balancing the professional with the personal, these apparent digressions enhance the filmmaker’s portrait of his likable, humble yet flawed subject. Understanding who Allison is deepens our appreciation of what he achieved.

Haney’s script notes that, although the immuno-oncology drugs Allison has developed aren’t for every cancer patient, they have helped treat nearly a million people worldwide. That’s an especially encouraging statistic not only for those coping with the disease Allison long ago set out to defeat but in the context of the current pandemic as well.