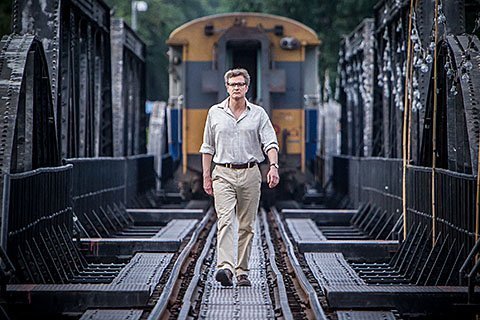 Colin Firth stars in a scene from the movie "The Railway Man." The Catholic News Service classification is A-III -- adults. The Motion Picture Association of America rating is R -- restricted. Under 17 requires accompanying parent or adult guardian.

NEW YORK (CNS) — Human cruelty takes its toll in "The Railway Man" (Weinstein), a searing account of a former prisoner of war who is unable to overcome the emotional trauma of his past.

Directed by Jonathan Teplitsky ("Burning Man"), the movie is based on Eric Lomax’s 1995 autobiography of the same title. During World War II, Lomax was one of thousands of British-led Allied troops taken prisoner by Japanese forces following the latter’s 1942 capture of Singapore.

The stunning fall of that stronghold — the "Gibraltar of the East" — was, in Winston Churchill’s words, the "worst disaster" in British military history.

Prisoners of war like Lomax were forced into slave labor to build the notorious Burma Railway, which became known as the "Death Railway" because of the thousands who perished during its construction. This is the same railroad featured in the fictional 1957 film "The Bridge Over the River Kwai."

"The Railway Man" begins three decades after the war. Lomax (Colin Firth) lives an unsettled, absent-minded existence in Scotland. He whiles away the days taking rail journeys around the country. On one such trip, he sits opposite Patti (Nicole Kidman), a retired nurse. Sparks fly (shades of 1945’s "Brief Encounter"), and they wed.

But the long shadow of war looms over their marriage. Lomax has terrifying nightmares, and his behavior is erratic, at times violent. Patti can see he is shell-shocked, crippled by post-traumatic stress disorder. But he refuses to discuss what happened in the internment camp.

Desperate to help him, Patti seeks out Lomax’s friend and fellow POW Finlay (Stellan Skarsgard) for advice and insight.

"My husband is a mess," she says. "I don’t believe in this code of silence you have."

As Finlay fills in the details, the story unfolds in flashback. The younger Lomax (Jeremy Irvine) and Finlay (Sam Reid) are radio engineers when the surrender forces them into servitude. Determined to survive, and possibly escape, they secretly construct a radio. Broadcasts reveal that the Allies have turned the tide, which gives the prisoners hope.

Their joy is short-lived, however; their captors discover the device. To spare his comrades, Lomax steps forward to receive the punishment, overseen by Takeshi Nagase (Tanroh Ishida), a Japanese interpreter. Lomax’s repeated beatings and torture are staged in graphic but historically accurate detail — they are certainly not a sight for the squeamish.

At this point the plot takes a remarkable turn: The elder Lomax discovers that Nagase (now played by Hiroyuki Sanada) is alive, and working as a guide at the internment camp, which has been turned into a museum. Longing for revenge, Lomax decides to travel to the Far East to confront his tormentor.

Despite its negative moral trajectory at this stage, in the end, "The Railway Man" offers an unexpected and powerful lesson fully in line with scriptural values.

The film contains graphic scenes of violence, including torture, and a suicide. The Catholic News Service classification is A-III — adults. The Motion Picture Association of America rating is R — restricted. Under 17 requires accompanying parent or adult guardian.