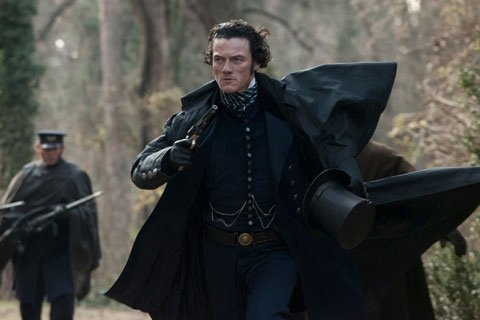 NEW YORK (CNS) — The macabre musings of Edgar Allan Poe have been adapted for the screen numerous times. In the latest instance, Baltimore’s most famous literary son is not only the central character — he’s also credited with being the progenitor of the horror movie genre.

While the makers of "The Raven" (Relativity) articulate the latter idea near the end of the proceedings, and only in passing, they’re clearly banking on it animating their tale. Instead, casting Poe as the forerunner of, say, low-budget horror director Roger Corman only underscores our sense that the author’s oeuvre is being picked at and that the film is straining to bring gravitas and wit to its own workaday mayhem and melancholia.

The grotesquery presented renders "The Raven" unsuitable for a majority of moviegoers and its failure to surprise will disappoint adults who self-identify as horror fans. Perhaps more unsavory than the images and scenarios themselves, however, is the underlying assumption that the reading or viewing public is naturally drawn toward morbidity, gore and sadism.

Either way, the titular bird’s associations with death and scavenging are fully borne out.

A title card at the outset states we’ll learn how the real-life Poe came to be discovered near death on a Baltimore park bench in 1849. This isn’t the only mystery, real or fictional, that fails to be solved satisfactorily.

Short of funds and inspiration, the middle-aged Poe (John Cusack) scrounges for work to pay his bar bills and, more nobly, to put himself in a position to wed his high-society beloved Emily (Alice Eve). Yet Poe’s prospective father-in-law, Captain Hamilton (Brendan Gleeson), has no intention of letting this caustic, gloomy and besotted scribbler marry his daughter.

Perversely enough, Poe’s redemption will be achieved through a series of ghastly murders inspired by his stories. A serial killer painstakingly enacts crimes that Poe has described on paper, gruesomely claiming innocent lives while toying with the author. Detective Fields (Luke Evans), the police officer assigned to investigate, enlists Poe’s help in catching the perpetrator, who raises the stakes by kidnapping Emily.

The plot turns are nothing if not predictable and director James McTeigue doesn’t exhibit sufficient finesse to smooth over logical wrinkles. Despite a promising premise, scant frights and little suspense are to be found in the campy, ill-formed piece.

The game and always likable Cusack brings a gothic hipness to the role and yet, matching the screenplay, the performances are overripe across the board. Injecting enough purple bombast to fill the Chesapeake Bay fails to enliven this cadaverous entertainment.

At one point, Poe bellows, "Is imagination now a felony?" While it doesn’t warrant incarceration, there’s no doubt "The Raven" is guilty of displaying too little of that valuable commodity.

The film contains frequent and explicit grisly imagery and violence, some profanity, one instance of rough language, much crude and crass talk and several instances of sexual innuendo. The Catholic News Service classification is L — limited adult audience, films whose problematic content many adults would find troubling. The Motion Picture Association of America rating is R — restricted. Under 17 requires accompanying parent or adult guardian.