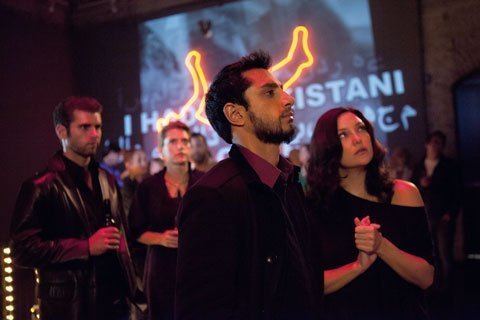 NEW YORK (CNS) — Are terrorists born or made? And which is worse: a jihadist just following the precepts of the Koran, or a Wall Street corporate raider, reaping misery as he follows orders, cuts jobs and increases profits?

Such dichotomies, as illogical as they may seem, form the basis of "The Reluctant Fundamentalist" (IFC), a thought-provoking — and provocative — exploration of the wide-ranging impact of the 9/11 terrorist attacks both on individuals and on whole cultures.

Working from the novel by Mohsin Hamid, director Mira Nair ("Amelia") lets the audience pass judgment, for better or worse. The result is an absorbing story with a flawed conclusion — one that seems to prioritize the force of circumstance over conscience when choosing between good and evil.

In Pakistan in 2011, an American professor has been kidnapped by radicals, who demand a ransom and the release of political prisoners. Hot on the trail is Bobby Lincoln (Liev Schreiber), a journalist who has been recruited by the CIA to interview the chief suspect, Changez (Riz Ahmed).

Changez, who teaches at the same university as the victim, is a firebrand, notorious for his lectures denouncing the United States and its imperialist policies abroad (yet commanding his students to pursue peace, not violence). But he wasn’t always so anti-American, as he proves by recounting his life story to Bobby.

"Looks can be deceiving," he insists. "I am a lover of America. Although it was hard for me to leave my family, I left to go West, where I was welcomed with open arms."

Told in flashback, the film explores Changez’s journey, first as a brilliant foreign student at Princeton, and then on the path of his meteoric rise to the top within a wicked corporation run by Jim Cross (Kiefer Sutherland).

Changez is seduced by money and power, as well as by the boss’ niece, Erica (Kate Hudson), a bohemian artist with big issues of her own. He travels the world as a "Master of the Universe," downsizing companies and racking up corporate profits.

When the twin towers of the World Trade Center fall, however, so does Changez. "You picked a side after 9/11," he tells Bobby. "I didn’t have to. It was picked for me."

Changez becomes a victim of discrimination and suspicion because of his appearance and accent. Brick by brick, the careful foundation he has built for himself in the New World crumbles. As he witnesses resurgent American patriotism and militarism with intervention in Afghanistan, he is drawn home to a new life as an activist.

So does Changez become a terrorist ("reluctant" or not), or is he a victim of circumstance? Whatever the outcome, the film overlooks the real "fundamental" issue at play, whether you’re from Pakistan, the U.S., or Bora Bora: the ethical imperative to refrain from the rampant pursuit of one’s own self-interest, heedless of the consequences for others.