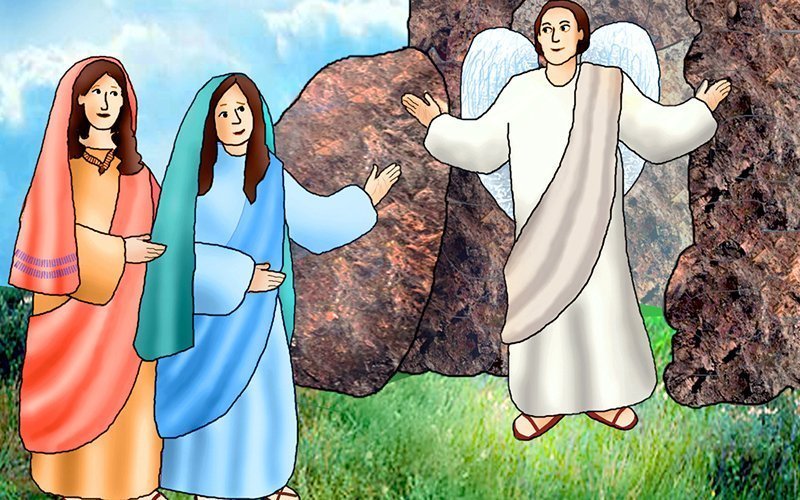 The risen Christ instructs the disciples

The risen Christ instructs the disciples

The sun was just beginning to lighten the eastern sky after the Sabbath. It was the first day of the week, three days after Jesus had been crucified. The ground started to tremble. Trees shook, boulders were thrown about like seeds in the wind, and the ground rose and fell with a powerful growl.

Then a great light flashed, and an angel appeared, rolling back the stone that had sealed the tomb where Jesus was buried. Some of the soldiers who had been guarding the tomb fainted from fright, and the others dropped their weapons and ran.

The earthquake stopped as suddenly as it had started, and the angel called out to two women who had come to visit the tomb. One was Mary, the mother of James and Joseph, and the other was Mary of Magdala. “Do not be afraid!” the angel said, “I know that you are seeking Jesus the crucified. He is not here, for he has been raised just as he said. Come and see the place where he lay.

“Then go and tell his disciples, ‘He has been raised from the dead, and he is going before you to Galilee; there you will see him.’” The angel continued, “Behold I have told you.” The two Marys could not wait to share this message with the disciples. But the guards who had fled also had a story to tell. They reported to the chief priests what had happened. The chief priests then talked with the elders and decided to pay the guards not to tell anyone else what they had seen. Instead, they were to say that the disciples stole the body of Jesus at night while the guards were sleeping. The soldiers did exactly what the chief priests told them to do, and received their pay.

Jesus appeared to his disciples in Galilee, just as the angel had said he would. Although they saw Jesus alive, the disciples had doubts.

In order to help his friends understand that he was really alive again, Jesus told them, “All power in heaven and on earth has been given to me. Go, therefore, and make disciples of all nations, baptizing them in the name of the Father, and of the Son and of the Holy Spirit, teaching them to observe all that I have commanded you. And behold, I am with you always, until the end of the age.”

READ MORE ABOUT IT:
Matthew 28

Q&A
1. What frightened the guards at the tomb?
2. What did Jesus tell his disciples to do?

The Old Testament has many references to or predictions about the Messiah who would come to be the Savior of God’s people. The story of the Jesus the Messiah’s birth, life and triumph over death are told in the four Gospels.

Jesus said everything that was written about him would be fulfilled. He also made a promise before he ascended into heaven: He told his followers to wait in Jerusalem until they received power from his Father.

That power came in the person of the Holy Spirit, as described in Acts 2. From that day, the disciples began to preach about Jesus all over the world. That event also marked the beginning of the church.

Many of the books in the New Testament were written to encourage early Christians or to explain some parts of our faith. Readings from the Bible are an important part of every Mass.

Germaine (1579-1601) was the daughter of a poor farm worker. Her mother died soon after giving birth to her.

Germaine was often sick and had a deformed right hand. Her father thought of her as a burden, and his second wife shunned her altogether. She was forced to sleep in the barn or other places away from the family.

When she was old enough to care for her father’s sheep, she spent much of her time out in the fields with them. The only time she would leave the sheep alone was when she attended Mass, which she never missed.

When her stepmother accused her of hiding stolen bread in her apron during the cold months of winter, Germaine pulled out from the apron an assortment of flowers that were as fresh as summer blooms. This was viewed as a miracle in the community, and even her stepmother realized that Germaine was a very special child.

Germaine was found dead in the field while she was still in her early 20s. We honor her on June 15