The risen Jesus appears to his disciples - Catholic Courier 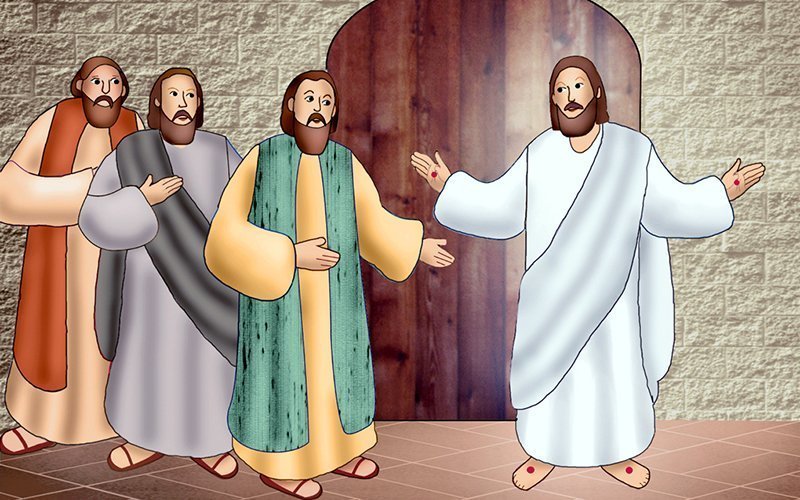 The risen Jesus appears to his disciples

The risen Jesus appears to his disciples

The disciples were together on the first day of the week. They were thinking about the events of the past few days. Jesus had been arrested, tried and sentenced to death by crucifixion. They had all seen it with their own eyes. They knew their master and teacher was dead. He had been placed in a tomb, and the tomb had been sealed shut. They were sure of that.

And they also were sure the room they were in was locked. They were afraid that someone might accuse them of being close to Jesus, and they might be punished, too. But then they heard a voice that sounded like Jesus. “Peace be with you,” he said. Jesus was in the room. Jesus knew his disciples were shocked to see him, so he showed them the holes the nails had made in his hands, and the gash the soldier’s spear had made in his side. Then the disciples rejoiced. Their teacher was alive again.

Jesus said, “Peace be with you. As the Father sent me, so I send you.” Then Jesus breathed on his disciples and said, “Receive the holy Spirit. Whose sins you forgive are forgiven them, and whose sins you retain are retained.” Then Jesus vanished before their eyes.

Suddenly there was a knock on the door. It was Thomas, another disciple of Jesus. He was not in the room when Jesus had appeared. The other disciples let him in and locked the door again. “We have seen the Lord,” they told him.

But Thomas did not believe. “Unless I see the mark of the nails in his hands,” he said, “and put my finger into the nailmarks and put my hand into his side, I will not believe.” A week passed with no other word from Jesus.

Then he appeared in the locked room again. This time Thomas was present. “Peace be with you,” Jesus said to everyone. Then he looked at Thomas and said, “Put your finger here and see my hands, and bring your hand and put it into my side, and do not be unbelieving, but believe.”

Thomas did as Jesus told him. He bowed his head and said, “My Lord and my God!”

Jesus replied, “Have you come to believe because you have seen me? Blessed are those who have not seen and have believed.”

Q&A
1. Who appeared mysteriously to the disciples?
2. What did Thomas do in order to believe?

Jesus lived on earth for a little more than 30 years. During that time he fulfilled the prophecies made about him by Old Testament prophets. He showed us that God loves us and he taught us what to do to show that we love him in return. The two most important events in the life of Jesus are celebrated as the two most important holidays of the church calendar. The celebration of his birth is Christmas, but even more important than that day is Easter, the day we celebrate his victory over death, a death that was caused by our sins. After Jesus rose from the grave, he appeared to some of his disciples. He told them he was going to leave them to be with his father in heaven. They were to remain in Jerusalem until another very special event happened, the day when the Holy Spirit came down upon them. We celebrate that day as Pentecost.

Dunstan (910-988) was born into a noble Anglo-Saxon family. He studied under British and Irish scholars and earned a position in the court of King Athelstan. After being persuaded by the Bishop of Winchester, Dunstan joined a religious order. From that point on he prayed and studied. He also made bells and sacred vessels for the church and copied or illustrated manuscripts. After being appointed as the abbot of Glastonbury, he immediately made plans to restore the monastery buildings. When Edred became king, he made Dunstan one of his chief advisers. From that position, Dunstan instituted a policy of reform and religious observance. After Edred’s death, Edwy became king. Because of his inappropriate conduct, Dunstan criticized him and was then exiled. His position and property were forfeited. This was only temporary, as Edwy was quickly replaced by his brother, Edgar. Dunstan was reinstated and later appointed as Archbishop of Canterbury. We honor him on May 19.