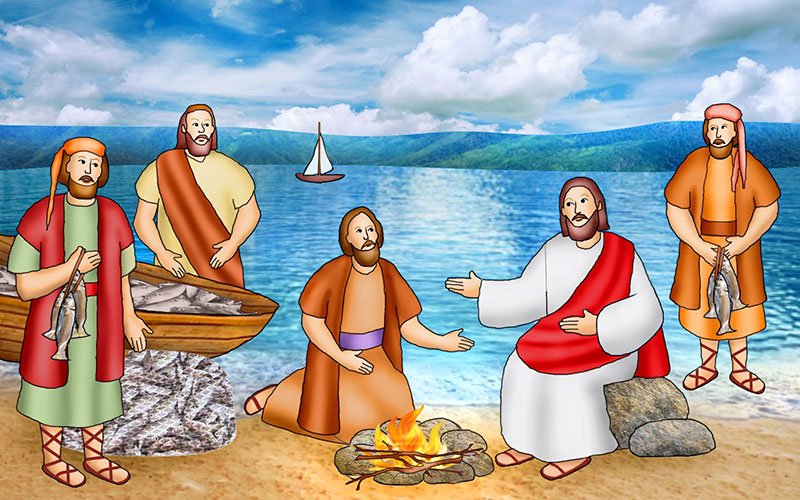 This is the artwork for Kids' Chronicle for June 29, 2022. (Illustration by Linda Rivers)

After Jesus rose from the dead, he appeared to his followers several times before returning to his Father in heaven.

One day, Jesus revealed himself to seven of his friends on the Sea of Tiberias.

The seven — Simon Peter, Thomas called Didymus, Nathanael from Cana in Galilee, the two sons of Zebedee and two other followers — were gathered on the seashore.

They decided to go fishing, but they didn’t catch anything that night.

At dawn, Jesus was waiting for them on the shore.

“Children, have you caught anything to eat?” Jesus called out.

“No,” they replied, not recognizing Jesus.

“Cast the net over the right side of the boat and you will find something,” Jesus said.

They did, and the net was so full of fish that they could not drag it into the boat.

The apostle whom Jesus loved suddenly recognized Jesus and told Simon Peter, who jumped into the water so he could quickly get to shore. The others brought in the boat and the net full of fish.

Jesus had a charcoal fire going and a breakfast of fish and bread ready for them to eat. When they were done eating, he turned to Simon Peter.

“Simon, son of John, do you love me more than these?” he asked.

“Yes, Lord, you know that I love you,” he replied.

Jesus asked the same question a third time, which made Simon Peter a little distressed.

“Lord, you know everything; you know that I love you,” he said.

“Amen, amen, I say to you, when you were younger, you used to dress yourself and go where you wanted; but when you grow old, you will stretch out your hands, and someone else will dress you and lead you where you do not want to go,” Jesus told Simon Peter, signifying by what kind of death he would glorify God.

And when Jesus had said this, he said to Simon Peter, “Follow me.”

1. Where did Jesus appear to his seven friends?

2. What did Jesus feed his friends for breakfast?

TRIVIA: How many fish did Jesus’ followers have in their net? (Hint: John 21:11)

For example, in Matthew 28:1-10, we read that Mary Magdalene and another woman found Jesus’ empty tomb. An angel told them Jesus had risen. As the two women rushed back to inform the apostles, Jesus met them on their way and greeted them.

In John 20:19-29, Jesus twice appeared to the apostles. The first time, the apostle Thomas was not there and did not believe that his friends had seen Jesus.

The second time, Jesus appeared to the apostles when Thomas was there, and Thomas believed.

And in Luke 24:13-35, two of Jesus’ followers were walking from Jerusalem to Emmaus.

Along the way, they talked about Jesus’ arrest, crucifixion and death.

Just then, Jesus began walking with them, although they did not recognize him.

“What are you discussing as you walk along?” he asked.

The men looked very sad and explained what had happened to Jesus.

After reaching Emmaus, they ate a meal together. When Jesus took the bread, blessed it, broke it and shared it with them, they finally recognized him.

Clelia Barbieri was born near Bologna, Italy, in 1847. She sought holiness even as a child, spending her days praying in church or weaving and sewing at home.

When she was 11, she had her first mystical experience on the day of her first Communion. She joined a catechetical group in her village, and she and some other members later formed the Sisters Minims of Our Lady of Sorrows, which was devoted to contemplation and good works.

Clelia died of tuberculosis in 1870, just two years after founding the order.

She is considered the youngest founder of a religious community in church history, and we remember her on July 13.

Yes, Lord, you know that I love you.