The risen Jesus appears to his friends - Catholic Courier 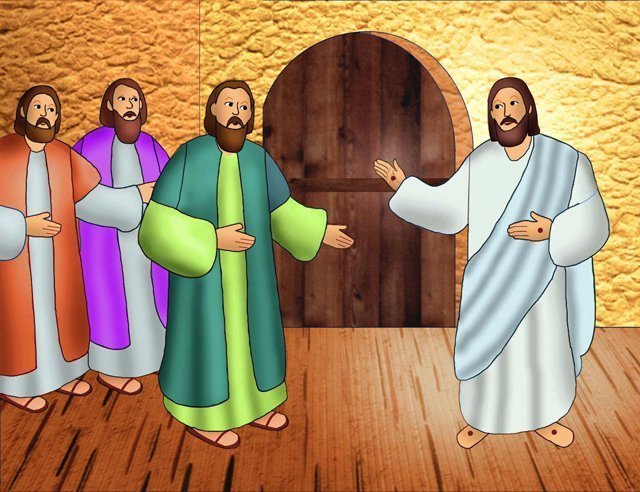 The risen Jesus appears to his friends

The risen Jesus appears to his friends

On the third day after Jesus’ death, Mary of Magdala went to his tomb. The stone had been rolled away and the body gone.
She ran to tell the apostles. Peter and another apostle rushed to the tomb and found only Jesus’ burial cloths inside. They did not understand that Jesus had risen from the dead.
The two apostles returned to a home in which Jesus’ followers had locked themselves because they feared being persecuted.
But Mary stayed at the tomb and wept. Suddenly, Jesus appeared. At first, Mary did not recognize him. But when she finally did, her sorrow turned to joy. Jesus asked her to tell the apostles that she had seen him.
“But go to my brothers and tell them, ‘I am going to my Father and your Father, to my God and your God,” he told Mary.
That evening, after hearing of Jesus’ appearance to Mary, the apostles received their own visit from the Lord.
“Peace be with you,” Jesus said as he suddenly appeared inside their locked room. Jesus’ friends started to rejoice. The Lord then breathed the Holy Spirit upon them.
“Whose sins you forgive are forgiven them, and whose sins you retain are retained,” he told his friends.
One of Jesus’ apostles was not there to witness the Lord’s appearance. His name was Thomas. He refused to believe that his friends had seen Jesus.
“Unless I see the mark of the nails in his hands and put my finger into the nailmarks and put my hand into his side, I will not believe,” he told them.
A week later, Thomas was with his friends in the locked room when Jesus again came into their midst.
“Put your finger here and see my hands, and bring your hand and put it into my side,” Jesus told Thomas, “and do not be unbelieving, but believe.”
Thomas did what he was told. He looked at Jesus.
“My Lord and my God!” Thomas exclaimed.
“Have you come to believe because you have seen me?” Jesus asked his friend. “Blessed are those who have not seen and have believed.”
READ MORE ABOUT IT:
John 20
Q&A
1. What did the apostles find in Jesus’ tomb?
2. Which apostle did not believe that his friends had seen Jesus?

Jesus appeared to his followers several times before ascending into heaven.

In Luke 24, two of his friends were walking along a road to a village near Jerusalem called Emmaus. As the two were talking about what had happened to Jesus, the Lord appeared and began walking with them. His friends did not recognize him, however. After reaching Emmaus, the two friends asked Jesus to stay with them. Jesus broke bread with them, and just as they recognized him, he disappeared.

In John 21, Jesus appeared to seven of his followers — one of whom was Simon Peter — who were fishing at the Sea of Tiberias. They saw him on shore as they brought their boat in. He told them to come and eat a breakfast of bread and fish. As Jesus talked and handed out the food, his followers finally recognized him. It was during this visit that Jesus told Simon Peter to feed his lambs and sheep.

St. Zita was born in Italy to very devout Christian parents. Her older sister was a Cistercian nun, and her uncle was a hermit. When she was 12, she went to live in the village of Lucca to be a servant for the family who owned a wool and silk weaving business.

She was known to get up during the night to wash herself off to prepare herself for praying and to attend Mass at a nearby church. She always gave her food to the poor, and a lot of times she slept on the ground.

She was very well-liked by the family she served, and she eventually became their housekeeper and also their adviser. The family allowed her all the time she wanted to visit the sick, poor and imprisoned. She especially was devoted to those prisoners who were going to be put to death. 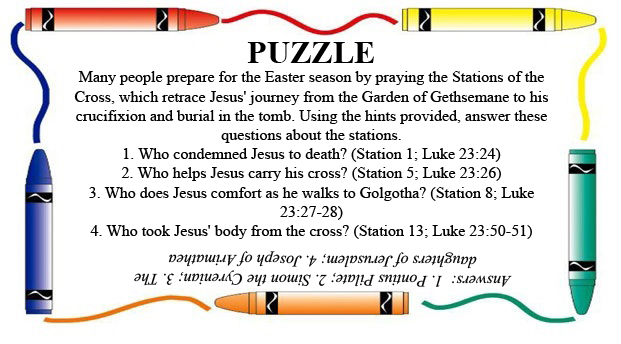