The risen Jesus talks to Mary of Magdala - Catholic Courier 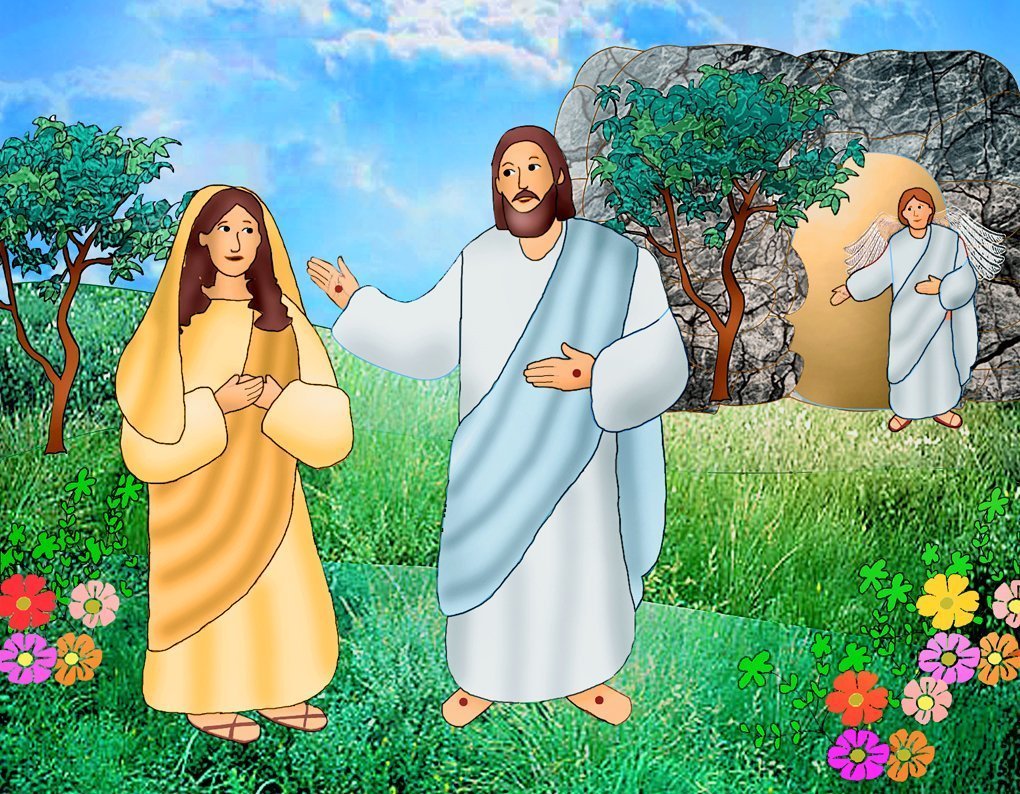 The risen Jesus talks to Mary of Magdala

The risen Jesus talks to Mary of Magdala

The sun had not yet risen on the first day of the week. Mary of Magdala came to the tomb where Jesus had been buried. She knew a heavy stone had sealed the entrance, but when she arrived the stone had been moved. The tomb was open and empty. She ran to see to see if she could find any of the disciples.

She found Peter and John and said to them, “They have taken the Lord from the tomb, and we don’t know where they put him.”

Peter and John immediately ran toward the tomb. John was the faster of the two and he saw the clothes Jesus had been buried in, but he did not go into the tomb. When Peter arrived, he went into the tomb. He saw the burial cloths in one place, and the cloth that had been wrapped around Jesus’ head in another spot. Then the two men returned home.

Mary stayed outside the tomb and cried. Not only was Jesus dead, but now his body was gone. Who could have taken it, and why? Then she heard a voice ask her from within the tomb, “Woman why are you weeping?”

Mary looked inside the dark tomb and saw two angels in white. One was sitting where the head of Jesus had been, and the other sat where his feet had been. She answered, “They have taken my Lord, and I don’t know where they laid him.”

As soon as she spoke, a man appeared behind her. He said, “Woman, why are you weeping? Whom are you looking for?”

Mary did not recognize the man, and thought he was the gardener. “Sir,” she said, “if you carried him away, tell me where you laid him, and I will take him.” Then the man, who was Jesus, although he had hidden his identity from Mary, said, “Mary!”

Then Mary knew who she was talking to. “Rabbouni,” she said, which means, teacher.

Jesus said, “Stop holding me, for I have not yet ascended to the Father. But go to my brothers and tell them, ‘I am going to my Father and your Father, to my God and your God.'”

After Jesus had left, Mary went to the disciples and said, “I have seen the Lord.” Then she delivered the message Jesus had given to her.

Easter is the most important Holy Day of the Church, because not only did Jesus die for our sins, but he rose from the dead so that we could live.

When we recite the Profession of Faith at mass, we say, “On the third day he rose from the dead.” The Catechism of the Catholic Church declares, “The Resurrection of Jesus is the crowning truth of our faith in Christ.” The first sign that Jesus may not have been dead was the empty tomb found by Mary Magdalene. Then Jesus appeared to his disciples. Thomas did not believe what he saw, but after he touched Jesus, he said, “My Lord and my God!” Let us rejoice that Jesus is alive for eternity.

Leonard Murialdo (1828 – 1900) was born into a very rich and very religious family. He felt the call to become a priest, and studied at the University of Turin. Instead of working in a parish, like most young priests, he used his family’s influence to receive permission to continue to study theology.

He eventually joined a group of other priests to help them teach the catechism, preach and hear confessions. After leaving for a year to study in Paris, he was put in charge of a college founded by another priest. He excelled in this position and he promoted music, theater and gymnastics. Later he established several agricultural centers to help juvenile delinquents become more productive young men. He was devoted to Mary the mother of Jesus. We honor him on March 30.