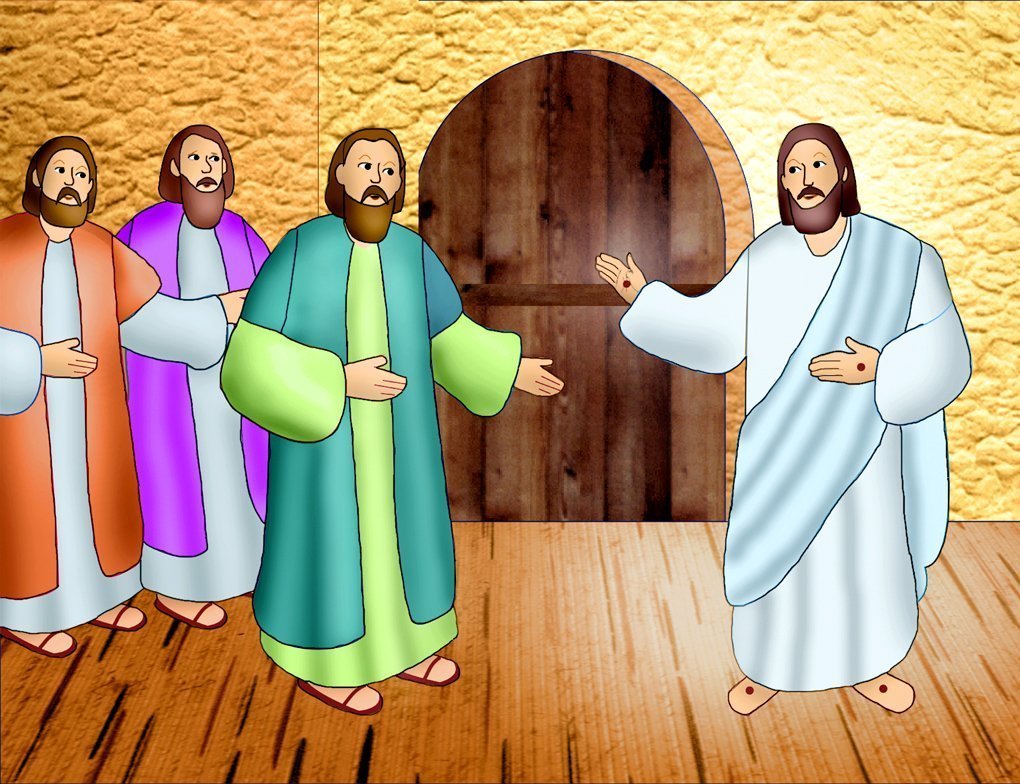 Jesus had been crucified and he had died on the cross. There was no doubt about that. The Apostles had seen the trial, the execution, the burial themselves. When Mary told Peter and John that the tomb was empty, they went to see if it was true. It was, and no one knew where the body of Jesus had been taken. Even though it was written in the psalms and the prophets that the Messiah would rise from the dead, the Apostles did not realize it was happening.

On the evening of the first day of the week, the Apostles were hiding in a room with the door securely locked. They were afraid that they, too, might be arrested and put in prison or killed, just as Jesus was.

Suddenly, Jesus was in the room with them. He looked at them and said, “Peace be with you.” Then he held up his hands to show his friends the holes that had been made by the nails that had fastened him to the cross. And he showed them his side, where he had been stabbed by a sword while hanging on the cross. The Apostles were happy to see Jesus again, alive.

“Peace be with you,” he said again. “As the Father has sent me, so send I you.” Then Jesus breathed on his friends and said, “Receive the Holy Spirit. Whose sins you forgive are forgiven them, and whose sins you retain are retained.” Then Jesus disappeared as quickly and silently as he had come in to the room.

Thomas, one of the Apostles, had not been in the room when Jesus had appeared. When he arrived, the others said to him, “We have seen the Lord.” But Thomas, who knew that Jesus was dead, said, “Unless I see the mark of the nails in his hands and put my finger into the nailmarks and put my hand into his side, I will not believe.”

Another week passed, but there was no other sign from Jesus. The Apostles were again in the locked room. This time Thomas was with them. Again Jesus appeared in the room. “Peace be with you,” he said. Then he looked at Thomas and said, “Put your finger here and see my hands, and bring your hand and put it into my side, and do not be unbelieving, but believe.” Thomas touched Jesus and declared, “My Lord and my God!”

Q&A
1. What did Jesus say when he saw his disciples?
2. What did Thomas have to do before he believed?

We do not know very much about Thomas. We learn the most about him from the Gospel of John, and it appears he was not afraid to confirm what he was being told or to seek more information.

When Jesus said he was going to Judea to see Lazarus, who was very sick, Thomas said, “Let us also go to die with him” (Chapter 11).

Before the Last Supper, Thomas said to Jesus, “Master, we do not know where you are going; how can we know the way?” (Chapter 14).

And of course, when he saw Jesus after his death on the cross, he did not at first believe, but after touching Jesus he declared, “My Lord and my God!” (Chapter 20).

Germanus (d. 732) was the son of a senator in Constantinople. He became a priest and eventually became the Bishop of Cyzicus and then the bishop of Constantinople. When Leo the Isaurian became emperor in 717, he promised Germanus that he would preserve the practice of Catholicism. However, 10 years later he agreed with some dissenters and prohibited the veneration of religious images. Germanus protested against this decree for many years. Leo never changed his mind, but neither did Germanus. Leo pleaded with Germanus to give up, but the only compromise that they reached was that Germanus spent the rest of his life in seclusion, as if in a monastery. Germanus lived until he was in his 90s. We honor him on May 12.