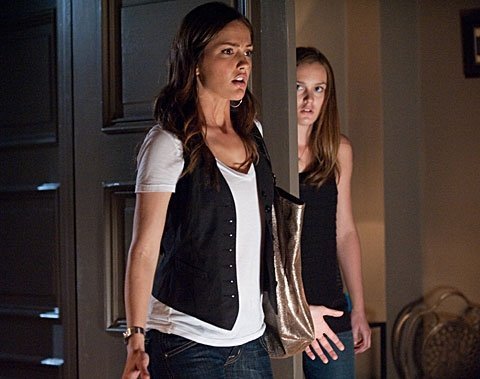 NEW YORK (CNS) — Animal lovers be warned: One of the more disturbing scenes in "The Roommate" (Screen Gems) concerns the untoward fate of a kitten named Cuddles.
?
Viewers weighing other considerations will find that, though the level of onscreen violence directed against humans in this bottom-of-the-class campus horror flick is low, so too is the bedroom behavior of some of the characters.
?
Iowa-bred freshman Sara (Minka Kelly) arrives at the University of Los Angeles with dreams of becoming a fashion designer.
?
While the wide-eyed Hawkeye’s first evening on the Left Coast yields her a hard-partying new BFF named Tracy (Aly Michalka) and a love interest in the person of frat boy Stephen (Cam Gigandet), it mysteriously fails to produce an occupant for the other bed in her dorm room.
?
Only when she staggers back home in the wee hours, drunk to the point of nausea, does Sara encounter Rebecca (Leighton Meester). Though friendly enough at first blush, Rebecca — a native Angelino from a wealthy but dysfunctional background — has, it seems, her quirks.
?
Principal among these is her obsessive determination to have Sara all to herself. So — in moods that range from the merely pushy to the wildly psychotic — Rebecca sets out to make life difficult, and ultimately dangerous, for anyone who might get in the way of such exclusivity.
?
As directed by Christian E. Christiansen, the proceedings thus initiated drag along sluggishly until an overheated climax.
?
Besides Tracy and Stephen — and, of course, poor little Cuddles — Rebecca’s list of targets eventually includes Professor Roberts (Billy Zane), Sara’s most distinguished instructor, whose high-flying academic reputation belies his predatory and adulterous interest in coeds.
?
As for another of her rivals, Sara’s glamorous fashion-industry mentor Irene (Danneel Harris), Rebecca finds that the best approach to victimizing her is to play on Irene’s lesbianism. In a scene calculated to please Stephen’s loutish fraternity brothers — and, more to the point, their ticket-buying real-life counterparts — we watch as the pair does a little necking in a nightclub ladies’ room before heading off to Irene’s place.
?
Don’t look, Cuddles!
?
The film contains bloodless but occasionally deadly mayhem, nongraphic nonmarital sexual activity, cohabitation, same-sex kissing, brief partial nudity, at least one use of profanity, about a dozen crude terms and a bit of crass language. The Catholic News Service classification is L — limited adult audience, films whose problematic content many adults would find troubling. The Motion Picture Association of America rating is PG-13 — parents strongly cautioned. Some material may be inappropriate for children under 13.
?
– – –
?
Mulderig is on the staff of Catholic News Service. More reviews are available online at www.usccb.org/movies.