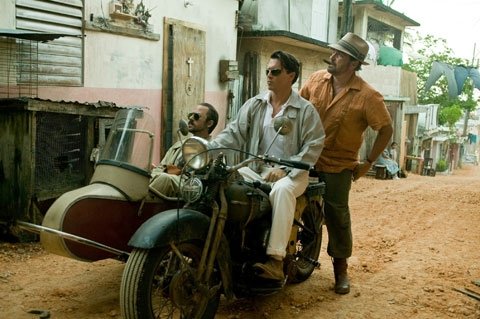 NEW YORK (CNS) — Smoke, drink, be hung over, repeat. That’s the lusty refrain of "The Rum Diary" (FilmDistrict), although you would expect nothing else from a film based on gonzo journalist Hunter S. Thompson’s roman a clef about his early years in the business, living in Puerto Rico.

To its credit, the movie — written and directed by Bruce Robinson and starring Johnny Depp as Thompson’s alter ego Paul Kemp — doesn’t try to glamorize the abundant substance abuse. It’s set in 1960, when such behavior was considered part and parcel of newspapering, along with colorful swearing and perpetually rumpled clothes.

Kemp, like Thompson, is shown to be an idealistic journalist anxious to use pen and ink as his weapons against injustice to the poor, dishonest politicians and corporate greed. His rage builds, but because he’s at a failing newspaper interested only in making tourists happy, he becomes a Jeremiah unable to let loose his jeremiad. That will only come later in his career, after he has left the island.

Kemp arrives at the San Juan Star hoping to change lives with his writing but is assigned instead by its unambitious editor to write the horoscope column and interview grotesque American tourists about what they like about Puerto Rico, which they see only from their hotels.

He gets an offer from a local developer named Sanderson (Aaron Eckhart) to moonlight writing brochures for a massive hotel project. Set on a government-owned island, the resort’s construction will destroy most of the native habitat.

Kemp finds himself besotted with Sanderson’s voluptuous live-in girlfriend Chenault (Amber Heard), who eventually falls in love with him, even though she’s commitment-phobic.

Mature adults prepared for its portrayal of drunkenness and drug addiction should be able to handle this material, which in portions is unexpectedly sweet and nostalgic in the manner of coming-of-age stories.