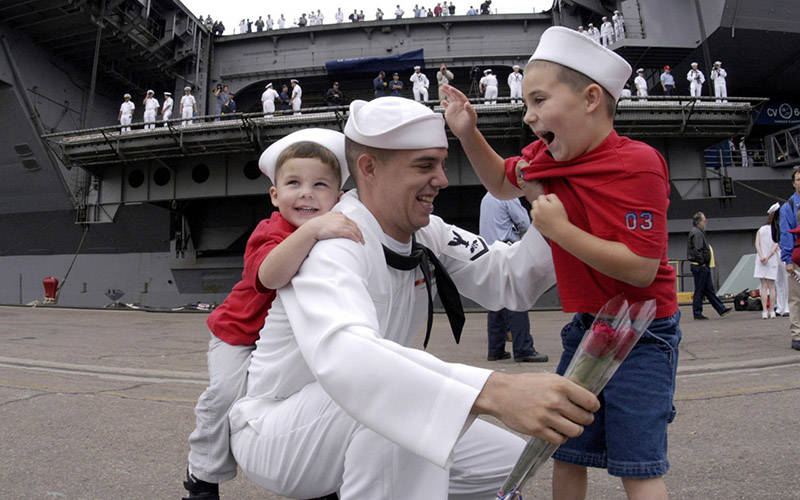 A sailor aboard the USS Constellation in San Diego is greeted by his children in this 2003 file photo. The invitation to move outside of the self to the other is the divine pedagogy of fatherhood. (CNS photo by Jaime Recto/Reuters)

Lessons for Father’s Day and a lifetime

I expected fatherhood to change the routines of my life. Everyone told me it would. Goodbye, sleep. Hello, collapsing in exhaustion at 8 p.m.

What I did not suppose was the way fatherhood would be an occasion for conversion.

Not that I was some sort of irreligious knave. I taught theology at the University of Notre Dame. I attended daily Mass as often as possible. I spent years as a catechist for middle school students.

The source of my unrighteousness was the absence of a disposition of solidarity. In every dimension of my life, I thought only of myself. At work, I focused on the trajectory of my career and where I was going in the future.

There were ladders to climb, and I wanted to be on them. It did not matter if climbing that ladder meant stepping on the heads of my colleagues. An unkind word here or there to the right person, and I would be elevated in the eyes of my superior.

When students were struggling in class, I thought only about the misery they wrought on me. You did not turn in your assignment on time! You thought that was a paper acceptable to write!

On not a few occasions, I failed students in class with a hidden albeit perverse joy. I pompously shared the worst things my students wrote, delighting that I could shine light on what I believed to be their idiocy.

And then my son was born.

Like all conversions in life, change was not immediate. Spending every night with a little babe who was struggling to keep his milk down was a vigorous initiation into a saving solidarity. As I attended to the suffering of this little creature, my beloved son, I began to think not of myself.

If sin, as St. Augustine notes, may be described as a curving in upon the self, God was inviting me, through my son, to attend to the rest of the human family around me rather than gazing inward at my own self.

In the years that followed, this disposition carried over into the rest of my life. I came to recognize that untrammeled ambition was not becoming of a father. I needed to be at the center of every project and initiative because, in my deformed imagination, I was the most important person in the room.

And yet, through the mundane care of my son, I came to see how wrong I was. My flourishing was tied to my colleagues’ flourishing.

A similar conversion took place among my students. I could no longer separate my identity as dad from my identity as teacher. When students sent late-night emails begging for an extension because of exhaustion, I did not just grant them. I asked what was going on and whether they needed to meet.

I noticed how many of my students were distracted and suffering from problems at home. Their brother just went missing. Their dad was dying from cancer. I changed everything about my style of teaching and grading, putting these young men and women at the center. I rejoiced more at success than failure.

I suppose, in essence, this invitation to move outside of the self to the other is the divine pedagogy of fatherhood. Men, for the most part, do not grow up thinking about being dads. When I ask my undergraduate men if they have thought about being dads, few say yes.

And yet, for many of us, our sanctification will take place through fatherhood. St. Joseph is our icon. Unlike me, Joseph was already righteous. From the beginning, it was clear that he thought about others.

He refused to make a stink when he learned that his was betrothed was with child not by him. He listened to the angel. He cared for his little family as they trekked to Egypt and back. He worked in silence, living a mundane life in the presence of Jesus and Mary. He died in their arms.

In declaring a Year of St. Joseph during the COVID-19 pandemic, Pope Francis is prophetic. Think about the many social ills we are experiencing as a society, ills exacerbated by the pandemic: politicians who think more about their own career and self-importance than their responsibility for solidarity, businesses that operate with concern about profit margin alone, forgetting to care for their workers.

And perhaps, in this Year of St. Joseph, through his intercession, church and society alike can rediscover the saving gift of fatherhood: being for others.

Timothy P. O’Malley is the director of education at the McGrath Institute for Church Life at the University of Notre Dame and academic director of the Notre Dame Center for Liturgy.