The shepherds hear the news of Jesus' birth - Catholic Courier 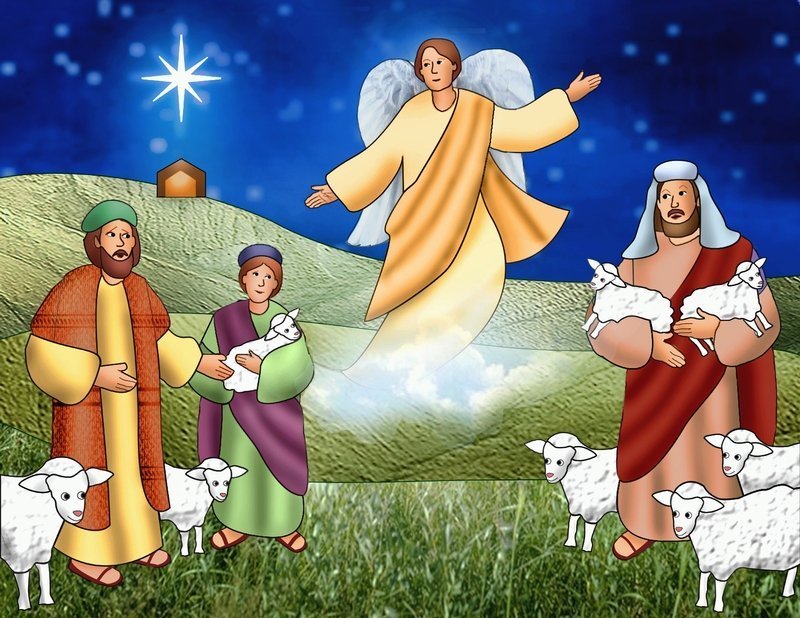 The shepherds hear the news of Jesus’s birth

The shepherds hear the news of Jesus’s birth

One day, an angel visited a young woman named Mary, who was betrothed to a man named Joseph.

The angel told Mary that the Holy Spirit would come upon her, and she would conceive and give birth to a son. She was told to name the baby Jesus.

“Therefore the child to be born will be called holy, the Son of God,” the angel said.

Several months later, Caesar Augustus, emperor of the Roman Empire, decided that everyone living in the empire had to be counted in a census. He sent out a decree, ordering people to go to their ancestral hometowns to be enrolled.

Since the Romans were in control of the lands in which the Jewish people lived, they had to take part in the census, too.

Joseph and Mary lived in Nazareth, which was in Galilee. Joseph was of the house and family of King David, so he and Mary had to travel to Judea to the city of Bethlehem — also known as the city of David — to be enrolled in the census.

Mary was at the end of her pregnancy and was very close to giving birth. Even so, she and Joseph made the long trip from Nazareth to Bethlehem.

While Joseph and Mary were in Bethlehem, it came time for Mary to have her baby. She gave birth to a son, just as the angel had told her. Mary wrapped him in swaddling clothes and laid him in a manger, because there was no room at any of the city’s inns.

Suddenly, an angel appeared to them. They were very frightened by what they saw.

“Do not be afraid; for behold, I proclaim to you good news of great joy that will be for all the people,” the angel said. “For today in the city of David a savior has been born for you who is Christ and Lord. And this will be a sign for you: You will find an infant wrapped in swaddling clothes and lying in a manger.”

So the shepherds hurried to Bethlehem, where they found Joseph, Mary and Jesus, just as the angel had said.

1. Where did Joseph and Mary travel?

2. To whom did the angel announce Jesus’ birth?

Being a shepherd was a common occupation in biblical times.

Shepherds oversaw flocks of sheep and goats, either for their families or as employees of other people. Sheep and goats were important sources of meat and milk, and their wool or skins were used for clothing.

During warm weather, shepherds worked and lived in the fields taking care of their flocks. They led the animals to different grazing areas and made sure they had enough to eat and drink. The sheep and goats even learned the sounds of their shepherds’ voices and responded to their calls.

When the weather grew cold, the flocks were moved indoors for the winter. When the spring came, the sheep were shorn, and the entire process of leading the flocks to different grazing areas for the spring and summer began again.

St. Elizabeth Ann Seton (d. 1821) was born into an Episcopal family in New York, N.Y., in 1774. She married a wealthy businessman and had five children. Her husband became ill and traveled to Italy for help, but he died there. It was in Italy that Elizabeth became interested in Catholicism, and she was received into the church in 1805.

In 1809, she formed the first order of women religious founded in the U.S., the Daughters of Charity of St. Joseph. The order helped the poor, founded orphanages and hospitals, and worked with parochial schools.

When she died in 1821, her congregation had 20 communities in the U.S. In 1975, she became the first native-born North American saint. We honor her on Jan. 4.