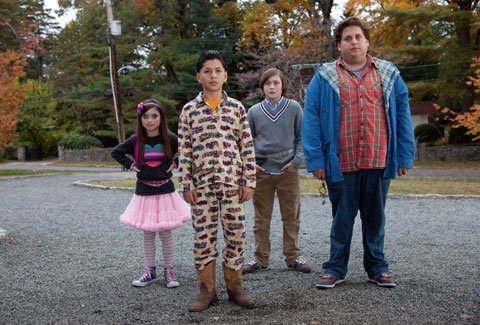 NEW YORK (CNS) — Felony child endangerment presented as "life lessons" constitutes the theme, such as it is, of "The Sitter" (Fox).

Director David Gordon Green and screenwriters Brian Gatewood and Alessandro Tanaka run the gamut of degradation, tossing in some racism for good measure.

Jonah Hill plays Noah, a schlubby failure whose only goal is to gain happiness for his mother Sandy (Jessica Hecht). Noah has been kicked around all his life, or at least ever since his successful father Jim (Bruce Altman) abandoned the family.

To let his mother attend a party where she might find a new romance, Noah agrees to baby-sit three neighbor kids: Slater (Max Records) Blithe (Landry Bender) and Rodrigo (Kevin Hernandez), all of whom have issues of their own.

Slater — the oldest, at all of 13 — is dealing with the budding realization that he’s gay; Blithe is foul-mouthed and seeks a hard-partying lifestyle; and Rodrigo, a foster child from South America, likes explosives and has a bladder-control problem.

When Noah hauls them to a drug dealer to buy cocaine for Marisa (Ari Graynor), whom he hopes to make his girlfriend, all goes, er, well until Rodrigo steals a $10,000 "egg" of the drug which Noah breaks. He spends the rest of the night hurtling around New York City trying to make things right for himself, dealing with his own pain, and "solving" problems for the children with oversimplified lectures.

Slater’s sexual anxiety is resolved when Noah tells him, "There’s nothing wrong with you. You’re normal." Noah advises Blithe to jettison the garish makeup and act her age, and explains to Rodrigo his own anger at having been ditched by his father.

All of this occurs after Noah has committed a break-in and multiple thefts, and dealt with grotesquely stereotyped African-Americans at a club.

Be dishonest, engage in crime, put children in harm’s way, and all will turn out right. That’s the "moral" of this sad, sick fantasy — a take-away that should make all sensible moviegoers stay away.