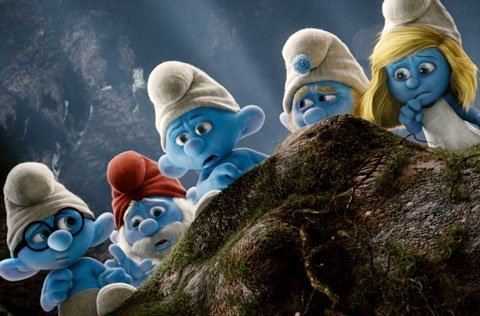 NEW YORK (CNS) — Young children should giggle constantly through "The Smurfs" (Columbia), a comedy mixing animation and live action in which 3-D versions of the famous blue elves (only three apples high) leave their enchanted forest village to interact with an all-star cast in our world — and get tossed around and squished like so many Nerf balls in the process.

As for accompanying adults — who may or may not have grown up with the 1980s Hanna-Barbera cartoon series on NBC — they’re more likely to think, "Hey, at least it only lasts 86 minutes!"

Extending a franchise that originated in the 1950s with the work of Belgian cartoonist Peyo (Pierre Culliford, 1928-1992), the filmmakers kick off this latest adventure with Gargamel (Hank Azaria), the evil wizard who has long been the Smurfs’ nemesis, chasing a sextet of them off their home turf and pursuing them through a wormhole that leads smack dab into New York’s Central Park (convenient, that!).

Of course, his ability to conjure up Smurf-powered eternal youth and beauty puts him in demand, while his quest for magic Smurf essence drives the plot forward.

A scene in which Gargamel mistakes a champagne bucket for a chamber pot seems grafted from an Adam Sandler film. Similarly, when the traveling Smurfs find themselves temporarily confined in Patrick’s briefcase, one of them demands, "All right, who smurfed?"

At another point, we hear Gutsy proclaim, "You’ve got to grab life by the grapes!" Such gags, though rare, suggest that the filmmakers couldn’t decide whether to keep this iteration pure and sweet or descend into crude riffs on the classic characters.

Additionally, the conclusion is a bit intense — closer to a "Harry Potter"-style climax than the gentle wrap-up of a tale for tots.

The film contains moderately intense action sequences, mild scatological humor, and some slapstick violence. The Catholic News Service classification is A-I — general patronage. The Motion Picture Association of America rating is PG — parental guidance suggested. Some material may not be suitable for children.