The Space Between Us - Catholic Courier 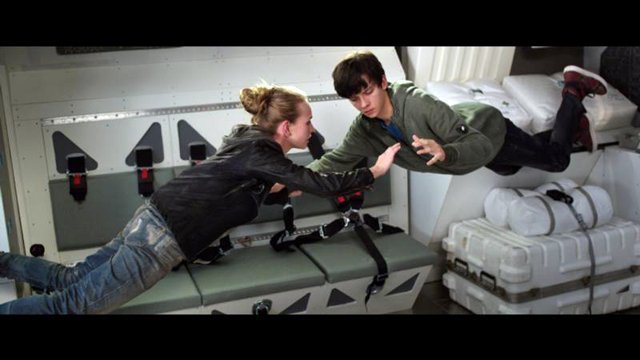 Britt Robertson and Asa Butterfield star in a scene from the movie "The Space Between Us." The Catholic News Service classification is A-III -- adults. The Motion Picture Association of America rating is PG-13 -- parents strongly cautioned. Some material may be inappropriate for children under 13.
By John Mulderig
Catholic News Service
NEW YORK (CNS) — Moral blemishes mar the science fiction-tinged romance "The Space Between Us" (STX), making it unsuitable for youngsters and teens.
Dramatically, director Peter Chelsom and screenwriter Allan Loeb waste a promising premise as they imagine the life story of Gardner Elliot (Asa Butterfield), the first human born on Mars.
The product of an unplanned pregnancy, Gardiner’s existence is kept a secret from the world after his astronaut mother, Sarah (Janet Montgomery), dies in childbirth. Nathaniel Shepherd (Gary Oldman), the founder of the company entrusted with colonizing the red planet — in collaboration with NASA — fears a financially ruinous scandal.
But an online relationship with Tulsa (Britt Robertson), a rebellious high school student bruised by her experiences as a foster child, has the now 16-year-old Gardner yearning to travel to Earth. The lonely lad also hopes to find his father.
As a result, he’s willing to face the medical risks the journey poses: Raised in zero gravity, Gardner will have difficulty adjusting to the home orb’s atmosphere, and the consequences could prove fatal.
Locked up in quarantine on his arrival, Gardner fears that Nathaniel and Kendra (Carla Gugino), the Mars colonist who has nurtured him as an informal adoptive mom, are plotting to ship him right back where he started. So he bolts, tracks Tulsa down, and together the two hit the road in search of Dad.
Their picturesque odyssey through the Southwest and out to the coast of California is marked by some low-key, fish-out-of-water humor based on naive Gardner’s lack of conversational inhibitions. And the script uses his unfamiliarity with the beauties of Earth to inspire the audience to reclaim their own awe.
But Gardner and Tulsa’s initially innocent bond eventually finds them sharing a sleeping bag under the stars. While no more than the sensuous preliminaries are shown on screen, this is presented as a perfectly natural development and as sensitive, satisfying behavior that young viewers might easily be influenced to imitate.
The duo’s road trip, moreover, is punctuated by some shoplifting and only made possible by serial car theft. Gardner mumbles some mild objections, but a blithe outlook on filching the property of strangers is depicted as a symptom of Tulsa’s toughness.
These ethical flaws obscure the fact that the script includes relatively little bad language. In fact, at the outset, the dialogue even strikes a vaguely religious note as Sarah declares, "Courage is fear that has said its prayers."
More prayer and less pilfering, along with a more responsible outlook on youthful sexuality, would have widened the appropriate viewership for "The Space Between Us." As it is, adolescent astronauts are ill-equipped for this particular space trip.
The film contains a benign view of theft, nongraphic but romanticized underage premarital sexual activity, at least one mild oath, a single crude and several crass terms. The Catholic News Service classification is A-III — adults. The Motion Picture Association of America rating is PG-13 — parents strongly cautioned. Some material may be inappropriate for children under 13.
– – –
Mulderig is on the staff of Catholic News Service.
Copyright © 2023 Catholic News Service, Inc. All rights reserved. Linking is encouraged, but republishing or redistributing, including by framing or similar means, without the publisher's prior written permission is prohibited.