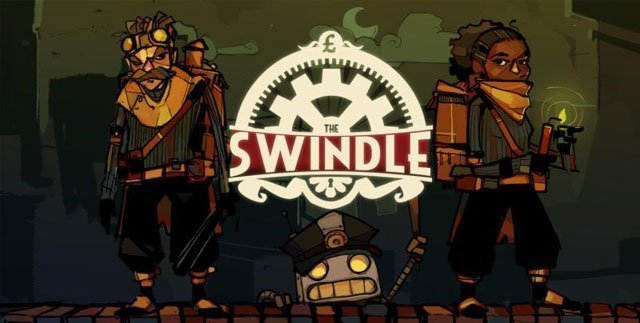 This is an image from the video game "The Swindle." The Catholic News Service classification is A-II -- adults and adolescents. Not otherwise rated.

Despite its name, "The Swindle" (Size Five Games), is not primarily about fraud. It’s about stealth.

That’s not a small difference. "Grand Theft Auto" and other robbery-themed games often depict — sometimes with horrific realism — the violent chaos that can result from violating the Seventh Commandment. Such titles seem to invite players to find glee and sadistic humor in the brutality of a fast-moving, reckless heist.

"The Swindle," by contrast, isn’t really concerned with what you’re stealing, much less any mayhem you may be creating as a consequence. Instead, gameplay focuses on cultivating a tricky technique and enjoying a cool environment.

No cars are crashed, no police officers are shot, nor are any bodies mangled. What developers were clearly aiming for was nonviolent escapist fun. Thus, when a character gets caught, he simply folds — like an old-school Pac-Man who’s run out of gas.

"The Swindle" can’t be endorsed for really young players, who might not be able to distinguish between what’s permissible within the imaginary world of a game and what’s morally acceptable in real life. But for any fan of electronic entertainment old enough to make such a distinction, this stylish entry offers harmless diversion.

The game is essentially a race against time. The player controls a master thief who in turn commands a group of lesser bandits — all of them out for money and other assorted loot. In a hundred days, however, a new, omnipresent detection system will be able to monitor the entire city in which the action is set and track every move you or your minions might make.

Launching from an airship, you have to dodge police, robots and dead ends — as well as negotiate a labyrinth of tunnels and alleys — to work your way up to the ultimate swindle at the end of the game. The clock is ticking, and mistakes eat up time.

If your persona is nabbed, you lose not only him, but all your accumulated booty as well — along with an entire day. If you’re successful, you can collect your ill-gotten gains, return to your aircraft, and either use the haul to purchase gear upgrades or trade it in for a ticket to a wealthier area. Once there, hopefully you’ll retire.

"The Swindle" takes place in the alternate world of "steampunk." This subgenre of science fiction draws its inspiration from the fashions, architecture and steam-powered machinery of the 19th century.

Often using a fictionalized version of Victorian Britain or the Wild West as its setting, steampunk romanticizes a time before the Internet or even television had been invented, with a particular aesthetic emphasis on clocks, engines, and cool outfits.

The art of "The Swindle" is gorgeous. Newly industrialized England is rendered as an array of blocky brown buildings and chimneys producing rolling smoke. A giant sun and moon alternate in illuminating the landscape.

The point of view allows gamers to see both above and below ground — it’s like one of those plastic ant farms in which you can observe all the subterranean goings-on. The colors are saturated in urban grays and deep earth tones.