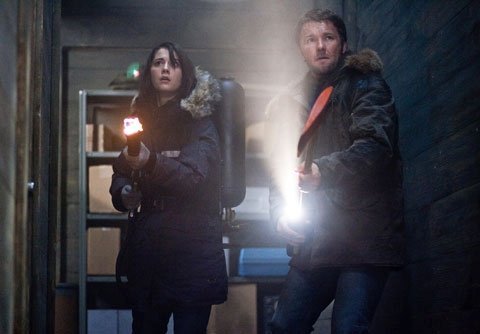 NEW YORK (CNS) — "The Thing" (Universal) is billed as a prequel to horror specialist John Carpenter’s 1982 movie of the same name. Carpenter’s celebrated film was itself a remake of the 1951 classic "The Thing From Another World," produced by Howard Hawks. And that influential picture was, in turn, based on the science-fiction novella "Who Goes There?" penned by John W. Campbell Jr. and published under a pseudonym in 1938.

As complicated and promising as this pedigree may sound, the resulting creature feature is too simplistic to sate eager horror buffs or hook new audiences. Because it doesn’t add any conceptual layers to the bare bones of the narrative or break any new technical ground, "The Thing" can be classified as "adequate but unnecessary." It delivers enough frights to avoid dishonoring the franchise.

From a moral perspective, the gory images and vulgar language contained in the homage aren’t disqualifying when considered in context. The former are, so to speak, the nature of the beast.

One winter’s day in 1982, Columbia University paleontologist Dr. Kate Lloyd (Mary Elizabeth Winstead) is recruited for an emergency mission to Antarctica where Norwegian researchers have discovered an alien buried inside a glacier.

Intent on replicating itself, the crab-like extraterrestrial begins preying violently on the dozen or so occupants of Thule Station. As a storm approaches and terror grips the isolated outpost, it’s up to Kate and American helicopter pilot Sam Carter (Joel Edgerton) to contain the damage.

Dutch director Matthijs van Heijningen makes little attempt to deepen the thematic subtext or exploit the inherently menacing atmosphere. His goal seems to be to showcase the forensic clarity of the visual effects depicting the alien. As visceral as they are, they’re often overwhelmed by blaring sound effects and music, a sign the filmmaker doesn’t have total confidence in the power of his images to scare moviegoers.

On the plus side, the screenplay never wanders off track and resolutely spotlights a female protagonist possessed of equal parts fortitude and smarts — along with, quite possibly, some alien DNA.

The drama flows from the group’s instinctual responses toward their survival predicament, particularly their suspicion of one another given that the parasitic monster adopts the form of the people he consumes.

Trust is in short supply, and while the movie isn’t the best exemplar of that trait, the humanity of the characters does remain intact, although barely. In other words, "The Thing" doesn’t qualify as an egregious recycling of a touchstone. And, though many will find it unsettling, its shortcomings don’t amount to a crime against cinema, good taste or decency.

The film contains frequent intense, gory creature violence, an implied suicide, some profanity, much rough, crude and crass language and a lewd reference to incest.