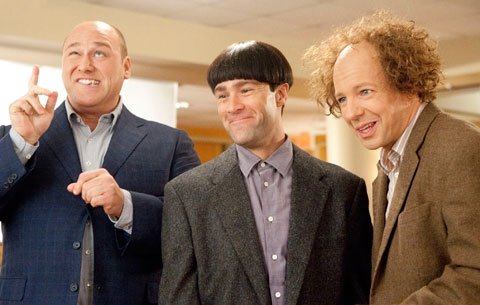 NEW YORK (CNS) — A lot of shtick, a little dance, a big live lobster down someone’s pants. That’s about what you’d expect from an updated version of "The Three Stooges" (Fox).

Far less predictable, and most unwelcome, is the assault on the dignity of those in religious life that also characterizes this highly uneven comedy.

The inclusion of such a discordant element is all the sadder, given that the directing team of brothers Bobby and Peter Farrelly, who co-wrote the screenplay with Mike Cerrone, clearly intended their project as a sweet-natured tribute to the antics of the original performers. Moe Howard, his brother Curly, and Larry Fine are collectively much beloved for their series of theatrical shorts, later a longtime television staple for kids.

The classic physical comedy and bits of twitching business are reproduced by Chris Diamantopoulos, Sean Hayes and Will Sasso (Moe, Larry and Curly, respectively) as faithfully as if they were performing kabuki theater.

The boys are shown, in a series of three "episodes," to have grown up in an orphanage run by the Sisters of Mercy. Never having been adopted, they emerge as true adult innocents, and sally forth into the outside world intent on raising the $830,000 it will take to keep their home facility from closing.

The Stooges’ mise-en-scene — if such it may be called — is, of course, filled with eye pokes, sledgehammer whacks and power tool-driven mayhem. So it’s not really objectionable to find visiting Msgr. Ratliffe (Brian Doyle-Murray) on the receiving end of a punch … well, a lot of punches, really. And, let it be said, he gives as good as he gets, delivering the famed triple-slap to the boys.

A sharp-tongued nun played by Larry David is also on the receiving end of a lot of head whacks. The abuse of authority figures or of people taking themselves too seriously in general is completely within the internal "Stooge logic." But a drag nun obviously propels the script a big step in the wrong direction.

What really crosses the line, however, is the highly offensive name David’s character is assigned: Sister Mary-Mengele. And "she" is called that, not once or twice, but throughout the film.

A joking reference to a Nazi war criminal in a film presumably aimed at a young audience constitutes not only a cheap shot at Catholic sisters; it’s a descent into tastelessness that should be deplored at all levels.

Additionally, near the end of the film, a sexualized young nun figure in a revealing swimsuit puts in a brief appearance. This is Sister Bernice, played by Kate Upton, this year’s Sports Illustrated swimsuit edition cover girl. Though fleeting, such a sight gag remains queasy and unsettling.

It’s unusual for a fictional feature, particularly a comedy, to use the name of an actual religious order. But here the nuns are clearly identified as Sisters of Mercy. Turns out, that’s because the Farrelly brothers have a link to the order: two aunts, it seems, are members of the community.

If referencing their congregation is meant as a shout-out to them, in this context, it’s certainly not a kind one.

The film contains irreverent and occasionally offensive humor directed at clergy and religious, some crude comedy and extensive physically abusive slapstick. The Catholic News Service classification is L — limited adult audience, films whose problematic content many adults would find troubling. The Motion Picture Association of America rating is PG — parental guidance suggested. Some material may not be suitable for children.