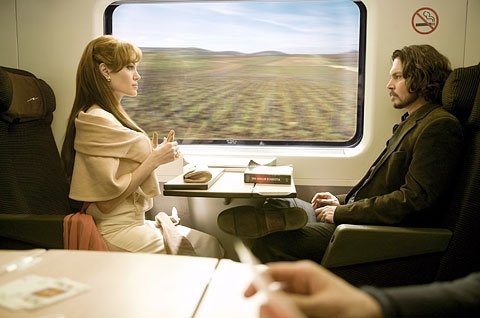 NEW YORK (CNS) — Adult viewers on the lookout for a two-hour cinematic vacation may appreciate the chance to tag along with "The Tourist" (Columbia). Though hardly memorable, this enjoyably old-fashioned romantic thriller — courtesy of director and co-writer (with Christopher McQuarrie and Julian Fellowes) Florian Henckel von Donnersmarck ("The Lives of Others") — does make for a pleasant diversion.

Unfortunately for Frank, Pearce is a fugitive embezzler known to have paid top dollar for extensive plastic surgery to alter his appearance. His financial antics have Pearce on the lam, not only from a high-level British police investigation — led by Scotland Yard inspectors Acheson (Paul Bettany) and Jones (Timothy Dalton) — but from Reginald Shaw (Steven Berkoff), the brutal gangster for whom Pearce worked and from whom he stole his ill-gotten millions.

So it’s not long before Frank, barefoot and clad in pajamas, is running for his life across the tiled roofs of the City of Bridges, with Shaw’s thugs in hot pursuit.

With Elise turning heads, but instructing Frank to sleep on the couch when they share a hotel suite for the night, and with La Serenissima providing a colorful backdrop to the generally bloodless action, "The Tourist" feels like something Hollywood might have offered up circa "To Catch a Thief."

Hitchcock this assuredly is not. But there are tete-a-tete dinners beside moonlit canals, rides in stylish mahogany motorboats and even a black-tie ball along the way, all of which helps to distract attention from the occasional lapses of logic.

Besides the amorous restraint the leading pair display — though the script implies that Elise and Pearce had lived together — love causes Elise to regret ensnaring Frank and she eventually does her best to extricate him from danger. He, in turn, demonstrates a willingness to sacrifice himself for her sake as the proceedings move toward their climax.

As for the villain Shaw, he freely acknowledges, in an unusually serious exchange of dialogue, that he values the money Pearce robbed from him so highly because he "paid an infinite price" to obtain it, namely his soul.

The film contains brief graphic violence, an implied premarital situation, at least one use of the F-word, a few crude and crass terms and occasional sexual references. The Catholic News Service classification is A-III — adults. The Motion Picture Association of America rating is PG-13 — parents strongly cautioned. Some material may be inappropriate for children under 13.