The Tree of Life - Catholic Courier 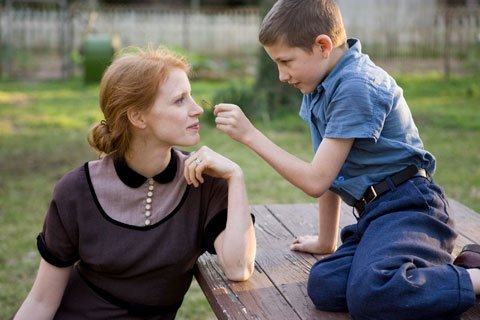 NEW YORK (CNS) — For his fifth movie, reclusive filmmaker Terrence Malick takes as his subject nothing less than the universe and our place within it. A metaphysical rumination that gives free rein to the writer-director’s impressionistic style and background as a philosophy professor, "The Tree of Life" (Fox Searchlight) is consistently beautiful and often moving.

Ultimately, however, the ambitious effort proves vague and unsatisfying because of its overly schematic premise — the juxtaposition of nature and grace — and glancing endorsement of New Age spirituality rather than belief in God.

While not attempting to definitively explain the mystery of existence, Malick is trying to be comprehensive and so hedges his bets by proffering a message of love consistent with Christianity (and many other worldviews) as well as a theologically suspect paean to nature.

The bulk of the film concerns Mr. and Mrs. O’Brien (Brad Pitt and Jessica Chastain), a Texas couple raising three boys during the 1950s. After opening with a quote from Job and showing the O’Briens in the wake of a tragic loss, Malick sketches a portrait of a strict father who, frustrated professionally, has grown cynical. In opposition, Mrs. O’Brien remains kindly and gentle, a model of maternal sympathy and warmth.

Their eldest son, Jack (played by newcomer Hunter McCracken), bristles at his father’s discipline and tests typical coming-of-age boundaries. We also glimpse the grown-up Jack (Sean Penn), a rather morose architect weighed down by an inchoate sense of guilt.

Woven throughout these comparatively traditional passages are abstract sequences depicting the origins of the universe and changes in the natural world. Using extensive special effects for the first time, Malick creates primordial imagery on both the cellular and cosmic levels — celestial fantasias, microscopic mutations, roiling gases, colorful seascapes and desert vistas. There’s even a scene featuring dinosaurs. Everything is accompanied by composer Alexandre Desplat’s exquisite music, much of it sacred-sounding choral work.

From a theological standpoint, "The Tree of Life" is best described as deeply spiritual but not religious. Although there are numerous references to God — in fact, the characters often address him directly in voice-over narration — Malick’s agnosticism appears to win out. He leaves the door open to God, yet seems equally willing to endorse a form of pantheism or animism that puts the natural world and mankind on equal footing.

As in his two most recent films, "The Thin Red Line" and "The New World," Malick’s camera repeatedly points upward to the sky. Despite the visual precision and fluidity of "The Tree of Life," we’re left wondering exactly what he sees up there.

Although it contains no morally objectionable content, the film’s mature subject matter and eschewal of plot and dialogue in favor of mood and imagery make it a better fit for cinephiles than mainstream audiences.

The Catholic News Service classification is A-II — adults and adolescents. The Motion Picture Association of America rating is PG-13 — parents strongly cautioned. Some material may be inappropriate for children under 13.