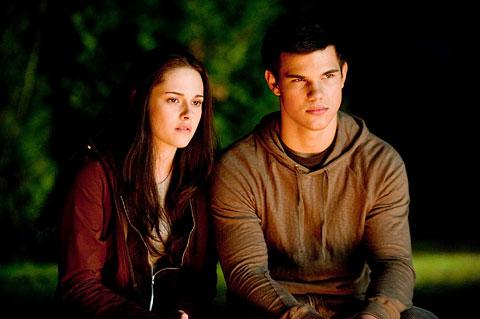 NEW YORK (CNS) — Though it sticks to a tried-and-true recipe that will undoubtedly delight the legions of enthusiastic followers who have made the franchise it extends a box-office blockbuster, "The Twilight Saga: Eclipse" (Summit) may strike less-committed viewers as occasionally over-familiar.

On the plus side, director David Slade’s third installment in the hugely popular Gothic romance series — based on the best-selling novels of Stephenie Meyer — draws, like its predecessors, on self-referential humor to leaven its potentially ridiculous proceedings. And, while Melissa Rosenberg’s script ramps up the mostly bloodless battling among its supernatural characters, it also shifts the basis of its main couple’s chaste interaction from a matter of constraint to one of choice.

Said couple is, of course, composed of well-behaved vampire Edward Cullen (Robert Pattinson) — who preserves the appearance of a high-schooler, despite being more than 100 years old — and teen mortal Bella Swan (Kristen Stewart). Their romance, typified by an early scene in which Bella reads poetry to Edward amid the blooming flowers of an idyllic rural glade, is currently complicated by a number of factors, some old and some new.

As in the previous episode of their story, 2009’s "The Twilight Saga: New Moon," Bella is determined, despite Edward’s many objections, to become a vampire herself to remain with him permanently. Equally opposed to this change is Bella’s friend, and would-be love interest, Jacob Black (Taylor Lautner). Despite being a werewolf — what’s a girl to do? — Jacob offers Bella the prospect of a somewhat normal life.

Edward and Jacob’s antipathy is more than personal, since, according to Meyer’s mythos, vampires and werewolves are long-standing instinctual enemies. But with Bella’s life threatened by villainous bloodsucker Victoria (Bryce Dallas Howard) — out for revenge against Edward for the death of her own true love, James, and busy assembling an army of plasma-hungry minions to advance her schemes — the rivals must unite to protect the object of their conflicting affections.

The climactic battle includes scenes of wounding and mutilation. However, since vampires are shown to be made of ice on the inside, there is only a bit of bloodletting among the human characters.

Though Bella is anxious to consummate her love for Edward, their brief, fully clothed bedroom encounter terminates in his refusal to do more than kiss and caress her. But while his restraint was previously motivated by the fear that passion might drive him to put his fangs into Bella, Edward now takes a stand on principle, resolving to uphold Bella’s virtue until the two are married.

When Edward acknowledges that such values-driven behavior isn’t "modern," Bella perhaps says more than she knows when she responds, "Not modern; it’s ancient!"

The film contains considerable stylized violence, an off-screen rape, a scene of nongraphic sensuality, a birth control reference and a few mildly crass terms. The Catholic News Service classification is A-II — adults and adolescents. The Motion Picture Association of America rating is PG-13 — parents strongly cautioned. Some material may be inappropriate for children under 13.