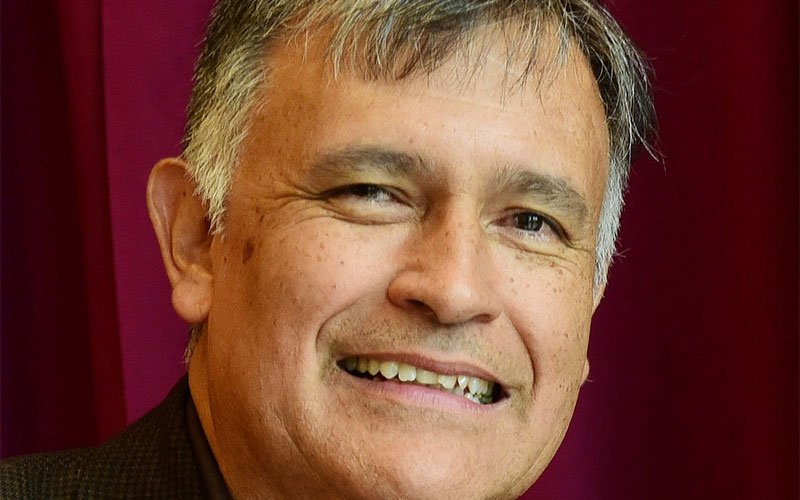 Sam Lucero served as news and information manager of The Compass, newspaper for the Diocese of Green Bay, Wis., from August 2007 to July 2022. (CNS photo courtesy Sam Lucero)

In July I retired from a 39-year career as a journalist in the Catholic press. Those years were spent writing, editing, photographing and laying out pages at five diocesan newspapers.

While recently rummaging through boxes of mementos I acquired over the years (newspaper clippings, workshop notes and correspondence from colleagues and readers), I came across a letter written by a woman I had interviewed long ago.

Anne Borchardt was a choir member at her parish in River Falls, Wisconsin, when she was diagnosed with breast cancer. The story, which was published in the Superior Catholic Herald during Holy Week in 1999, recounted her cancer journey and how it strengthened her faith.

After the story was published, Anne sent a card offering thanks.

“You have become an important part of my faith journey by helping me to get this story out,” she wrote, “because it was a bold step for me and ever since the article, my faith convictions have increased tremendously — which is the greatest thing that could ever happen to me. … I am eternally grateful.”

Anne died of cancer a year after her story was published. Yet even today, her words resonate clearly to me the important value of Catholic journalism.

The Catholic press plays an important role, but it’s in crisis

Journalists in the Catholic press, both writers and photographers, know the important role they play in helping people in the pews to live out their faith. Telling inspirational stories such as Anne’s cancer journey is just one way Catholic publications help readers not only connect to their faith, but grow in it.

Sadly, Catholic journalism is in crisis, as news outlets — diocesan newspapers and even the domestic offices of the century-old Catholic News Service — face closure.

Just in the past seven years, at least 11 diocesan newspapers have been shuttered or converted to online publications.

In today’s world, where Catholic identity has greatly succumbed to secular values, heralding the good news is an epic challenge for the church. To use a nautical term, church leaders need “all hands on deck” to communicate news and information.

Yet when the church’s communication structures continue a downward spiral, with diocesan newspapers closing, cutting back on publication schedules or moving to online-only versions, who is left to proclaim the message?

Understanding the value of Catholic journalism

The late Cardinal John P. Foley (1935-2011), who served 23 years as president of the Vatican’s Pontifical Council for Social Communications, understood the value of Catholic journalism.

The Philadelphia native, who once served as editor of his archdiocese’s newspaper, The Catholic Standard and Times, was a vocal proponent of the Catholic press.

“We are a people of the book, redeemed by the word of Jesus Christ,” Cardinal Foley said.

“We will continue to need the written word to inform us, to help form our attitudes in a Christian way, to help us to ‘put on’ the Lord Jesus in the modern world, to provide us with ideas and models for putting into practice — in our daily lives and in society — the teaching of Christ and of his church.”

As it was in 1822, when Bishop John England of Charleston, South Carolina, founded the Catholic Miscellany, the first Catholic publication in the United States, the mission of the Catholic press, according to Cardinal Foley, is “to inform, form, inspire, educate and strengthen the religious identity of Catholics.”

This mission is sacred for Catholic journalists who see their work as a vocation. Yet there is a gap created when fewer Catholic publications are delivered to parishioners’ homes and online publications, while easily accessible, lack the same shelf life.

How can Catholic newspapers survive?

Can the church count on secular publications to tell the story of local Catholic Charities agencies assisting incoming refugees in our communities or Catholic Relief Services supporting families displaced by the war in Ukraine?

Catholic journalism’s future is at a critical juncture. How can it survive when Catholic newspapers face extinction due to postage and printing costs? How do digital publications reach people in the pews who lack access, loyalty, trust or interest in online news?

Telling the story from a faith perspective is imperative for the church. Whether it’s offering analysis on the latest papal document, updating parishioners on church finances or sharing a catechumen’s story of conversion, journalists in the Catholic press form and inform their readers in a way the secular press cannot.

The value of Catholic journalism is really about impacting people’s lives, helping them see the world through the lens of faith. Thanks to Catholic publications, they know that their stories are important and that they are part of a community that is connected.

I believe Anne Borchardt, who witnessed the role of Catholic journalism in her faith journey, would agree with this assessment. It’s up to our church, its leaders and the entire body of Christ, to ensure that future generations of Catholics can tell their stories in Catholic publications.

(Lucero served as news and information manager of The Compass, newspaper for the Diocese of Green Bay, from August 2007 to July 2022.)