The victory of heaven is won through small efforts, pope says - Catholic Courier 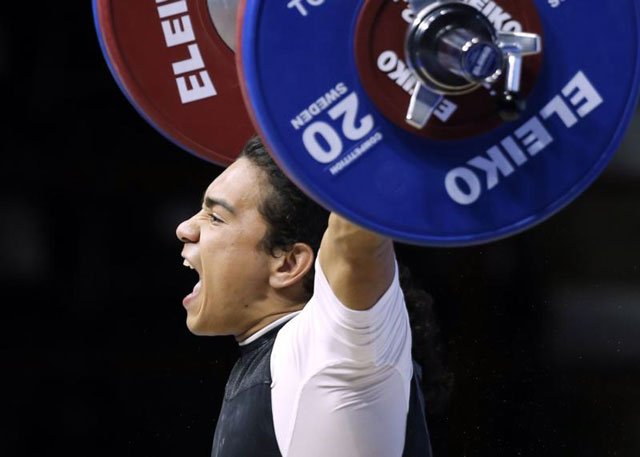 A weight lifter competes in the Pan American Games in Toronto, July 11. Pope Francis said Christians must train like an athlete in sanctity to win the "great victory of heaven."
By Junno  Arocho Esteves
Catholic News Service
VATICAN CITY (CNS) — Like an athlete, Christians must train in sanctity in order to win the "great victory of heaven," Pope Francis said at early morning Mass.
In his homily at Mass Oct. 19 in the chapel of his residence, the Domus Sanctae Marthae, the pope reflected on the first reading from St. Paul’s Letter to the Romans in which he calls on Christians to present their bodies "as slaves to righteousness for sanctification."
Although conversion is a duty and one must train like an athlete who is preparing to compete, the pope said that sanctification does not come from those efforts.
"The efforts we make, this daily work of serving the Lord with our soul, with our heart, with our body, with our whole life only opens the door to the Holy Spirit," the pope said. "It is he who enters into us and saves us! He is the gift in Jesus Christ!"
However, the pope acknowledged that the because of weakness, original sin and the devil, the temptation to fall back into old habits is constant. The path to conversion, he said, is made "a little bit each day" even when there are difficulties.
As an example, the pope spoke about a woman he met who despite suffering from cancer, "moved with happiness" and "acted like she was healthy.’
"And speaking about this attitude, she told me, ‘Father, I would do anything to beat the cancer!’ It’s that way with the Christian," the pope said. "We who have received this gift in Jesus Christ and we have passed from sin, from the life of iniquity" and must keep moving forward, "one step every day."
These small efforts, he said, "help us not to fall, not to go back, not to return to iniquity but to go forward toward this gift, this promise of Jesus Christ which is precisely the encounter with Him."
"Let us ask this grace from the Lord: to be strong, to be strong in this training of life toward the encounter, that we might receive the gift of justification, the gift of grace, the gift of the Spirit in Christ Jesus," the pope said.
Copyright © 2022 Catholic News Service, Inc. All rights reserved. Linking is encouraged, but republishing or redistributing, including by framing or similar means, without the publisher's prior written permission is prohibited.