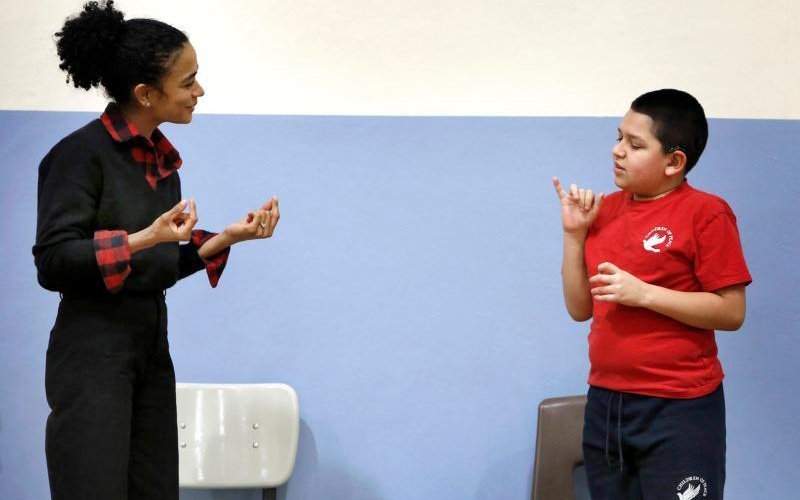 CHICAGO (CNS) — When Lauren Teruel Ridloff stepped through the door at Children of Peace School, she said she felt like nothing had changed.

“It was a little overwhelming,” said Ridloff, 40, who was last in the school — then known as Holy Trinity School for the Deaf — when she graduated from eighth grade in 1991.

Now Ridloff is perhaps best known for playing Connie on “The Walking Dead,” a post-apocalyptic horror show that airs on AMC, and for her Tony-nominated performance in the 2018 Broadway revival of “Children of a Lesser God.”

Father Joseph Mulcrone, director emeritus of the Archdiocese of Chicago’s Catholic Office of the Deaf, said that Ridloff, in some ways, had not changed either.

“She always had that smile,” said Father Mulcrone, who was at the school with retired principal Phyllis Winter to greet Ridloff when she returned to her elementary school Feb. 22 to speak to students.

Ridloff was born in Chicago, the second child of hearing parents, and was 2 years old before she was diagnosed as being deaf. A year later, she started preschool at Holy Trinity School for the Deaf.

“This school is family,” she said, before stepping into the gym where she once participated in classes and Christmas shows. “I grew up here.”

When she was in school, the teachers welcomed her and her family, she said, visiting them at home and helping her family learn to communicate with her as she learned to communicate herself. They encouraged her love of reading, and to make the leap to attend a boarding school for deaf high school students on the campus of Gallaudet University in Washington, before heading to California State University-Northridge to study creative writing.

She taught kindergarten in New York for 10 years, working in a school for deaf and hard-of-hearing children and hearing children of deaf parents, and then became a stay-at-home mother. Her husband, Douglas Ridloff, and her two sons, now 5 and 7, are also deaf. Along the way, she was crowned Miss Deaf America in 2000.

It was while she was home with her boys that she began to consider acting more seriously. She had a small part in the 2017 movie “Wonderstruck,” but her break came when “Children of a Lesser God” director Kenny Leon hired her as a sign-language tutor. Since he had not cast the female lead — a plum role for a deaf actress — he asked her to participate in a table reading. Just like that, she got the part.

While the play got mixed reviews and had a short run, Ridloff won raves.

“I feel I discovered my passion doing this,” Ridloff told the Chicago Catholic, newspaper of the Archdiocese of Chicago. “I feel so proud. I didn’t see this coming.”

Speaking to the elementary school students at Children of Peace, she told them about her role on “The Walking Dead,” but told them that their parents shouldn’t let them watch it. Later, speaking to an audience of mostly high school students from various programs for deaf and hard-of-hearing students in the Chicago area, she asked how many watched the show. Most hands went up.

She’s glad, she said, that there are two deaf characters on the show, because they can show different ways of being deaf. While Ridloff used hearing aids and had speech therapy as a child, she no longer speaks aloud conversationally.

But, she said, her deafness is not something sad to her.

“My deafness is a gift,” she said.

Ridloff told both audiences that she was going to share a secret with them. “I’m very bashful,” she said. “Painfully shy.”

That makes acting a challenge, but one she has learned to accept and conquer. She encouraged the students to follow that example.

“Even if we’re feeling scared about something, we don’t let that stop us,” Ridloff said. “If someone asks us to do something new, we should do it. And if we make a mistake ‚Ä¶ mistakes are good. When you mess up, you learn something.”

Martin is a reporter at Chicago Catholic, newspaper of the Archdiocese of Chicago.