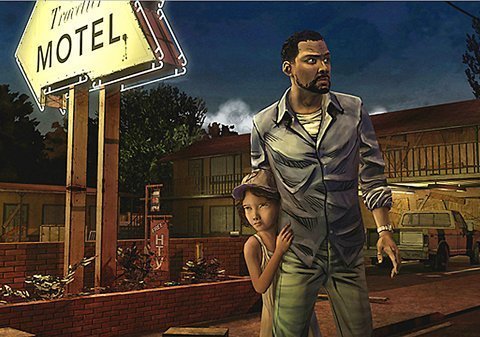 NEW YORK — Robert Kirkman’s graphic novel series "The Walking Dead" has caused quite a stir in the decade since its debut.

Widely successful in print, his zombie apocalypse saga has been turned into a highly rated AMC-TV show — currently in its third season — and, more recently, into a video game.

"The Walking Dead" (Telltale Games) was initially released in downloadable episodic form in 2012; now it’s being marketed as a single title available for purchase in stores. Like the books, the game is marked by considerable violence. But this is offset, at least somewhat, by a focus on the personal relationships linking the key characters — a humanizing element not often found in the zombie genre.

The player takes on the persona of Lee Everett. A convicted, but repentant murderer, Lee is being escorted to a Georgia prison when the advent of the flesh-eating undead suddenly releases him from his shackles.

While trying to figure out exactly what’s transpiring, Lee comes across a young girl named Clementine who has become separated from her parents. The two buddy-up and hit the road — joined, eventually, by other refugees. The gamer’s goal is to protect Clementine and guide her to safety.

To accomplish that, however, the player must tackle a succession of complex moral choices. For instance, should a bitten and infected companion be banished and left to his fate? Or should he be allowed to remain with the group — even though that will mean putting others at risk? Such decisions fundamentally affect the direction of the story.

They also draw reactions from Clementine who acts as the game’s moral arbiter. In accord with Catholic teaching, Clementine frowns on any effort to use bad means to achieve good ends. The gamer is thus encouraged to behave as ethically and empathetically as possible, despite horrible circumstances that might make immoral decisions seem acceptable.

Still, there’s no getting away from the gore on display here — or from other restrictive elements. So, its positive morality notwithstanding, "The Walking Dead" is electronic entertainment for discerning adults only.

The game contains some graphic violence with blood, mature themes, including euthanasia and suicide, occasional profanity and frequent rough and crude language. The Catholic News Service classification is L — limited adult audience, games whose problematic content many adults would find troubling. The Entertainment Software Rating Board rating is M — Mature.