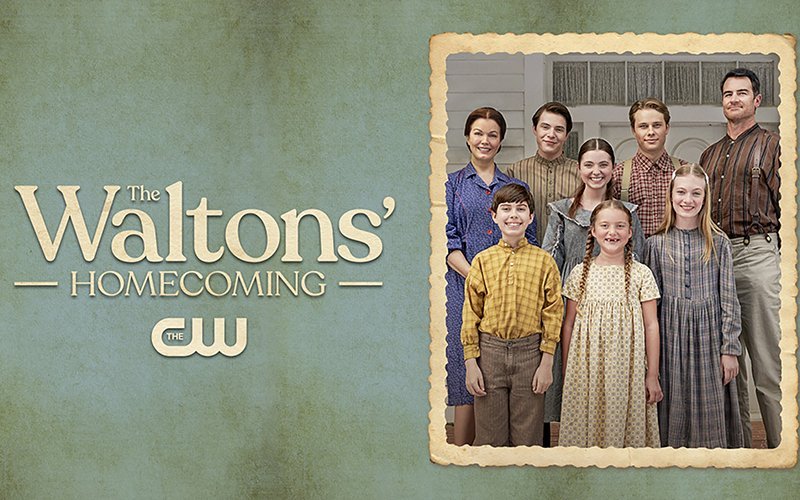 This is a poster for the television special "The Waltons' Homecoming," airing Nov. 28, 2021, on The CW. (CNS photo courtesy Viacom)

NEW YORK (CNS) — The arrival of the TV movie “The Waltons’ Homecoming” represents a perfect Christmas present for the entire family. The wholesome and heartwarming film airs Sunday, Nov. 28, 8-10 p.m. EST on The CW.

This new addition to the franchise marks the 50th anniversary of “The Homecoming: A Christmas Story,” the small-screen adaptation of Earl Hamner Jr.’s 1970 novel about a Depression-era family in the Blue Ridge Mountains of Virginia. The success of that drama led to “The Waltons,” the much-loved CBS series that ran for nine seasons, beginning in 1972.

Fittingly, the star of that show, Richard Thomas — who played Hamner’s fictional counterpart, the family’s eldest son John-Boy, an aspiring writer — narrates the tale. “It’s a story about an American family living through a time of social upheaval and economic hardship,” Thomas explains. “It’s about human kindness, compassion and love.”

Set on Christmas Eve 1933, this reworking of the original movie features a familiar cast of characters. John Walton Sr. (Ben Lawson) and his wife, Olivia (Bellamy Young), oversee a rambunctious family of six.

John-Boy (Logan Shroyer) is 17 and just beginning to scribble in his notepad. Mary Ellen (Marcelle LeBlanc) is a tomboy and emerging feminist. Erin (Tatum Sue Matthews) longs for a life on the stage, while youngest daughter Elizabeth (Callaway Corrick) pines for a new doll. Rounding out the boys is musician Jason (Christian Finlayson) and chirpy Jim-Bob (Samuel Goergen).

The plot is satisfying if predictable. In search of work, John has left home, and Olivia frets that he may miss Christmas. But a telegram arrives Dec. 24, indicating Daddy is on his way. Excitement turns to worry and dread when a blizzard erupts and John’s bus is overdue, leading his churchgoing, God-fearing family to pray for a Christmas miracle.

Other supporting characters include general store owner Ike Godsey (Charles Green) and the dotty Baldwin sisters, Emily (Annie Cook) and Maimie (Susan Savoie). Amusingly, as fans of the CBS program will recall, these seemingly demure and respectable ladies distill a potent tonic they refer to as “The Recipe” but that is, in fact, simply moonshine by another name.

In an unexpected bit of casting, Marilyn McCoo and Billy Davis Jr. — veterans of the pop group “The Fifth Dimension” — appear as the choir leaders of a local church.

Purists will quibble that, in the original series, there were seven children. John-Boy’s younger brother Ben has, mysteriously, been dropped.

Additionally, the somewhat-drab patina of “The Waltons,” which suited a poverty-stricken family, has been given a rosy makeover reminiscent of a Hallmark Channel offering. Thus the clan’s homestead looks like a high-end bed-and-breakfast, and the entire cast is dressed in fine, sparkling-clean clothes.

Such cavils, however, are inconsequential when weighed against the retention of the charming, family-friendly atmosphere that has always marked the Waltons’ saga. Remarkable by the entertainment industry’s current standards, it’s a tone that’s more welcome and refreshing than ever.