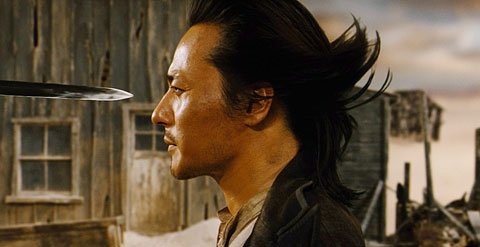 But, while it starts out as a conversion story, this frequently striking piece of cinema — a larger-than-life blend of martial arts, duels in the sun and operatic emotion — winds up graphically celebrating the very violence its hero has ostensibly rejected.

Said hero — a Samurai named Yang (Jang Dong-gun) — is the world’s greatest swordsman, a fighter trained from childhood to kill without remorse. His stony heart is touched, however, when his murderous path leads him to the infant girl who is the lone survivor of a rival clan.

Yang’s decision to spare the baby is viewed as an act of treachery by his own allies, a gang known as the Sad Flutes, and by their leader — and his mentor — the Saddest Flute (Ti Lung). So Yang escapes and seeks out an old friend who had emigrated to the American frontier.

Yang’s newfound resolve to remain peaceable is swiftly put to the test, however, when the demonic Army colonel (Danny Huston) who slaughtered Lynne’s family when she was a girl — and nearly raped her — returns in a bid to wreak fresh mayhem.

The confrontations which follow, though highly choreographed, are nonetheless gore-soaked, with veins spurting and heads and limbs hacked off with Ginsu-style precision. The moral waters are further muddied by the script’s implicit endorsement of Lynne’s quest for revenge against her vile, inhuman persecutor.

The film contains excessive bloody violence, the attempted rape of a minor, a vendetta theme, about a half-dozen uses of profanity and a few crude and crass terms. The Catholic News Service classification is O — morally offensive. The Motion Picture Association of America rating is R — restricted. Under 17 requires accompanying parent or adult guardian.